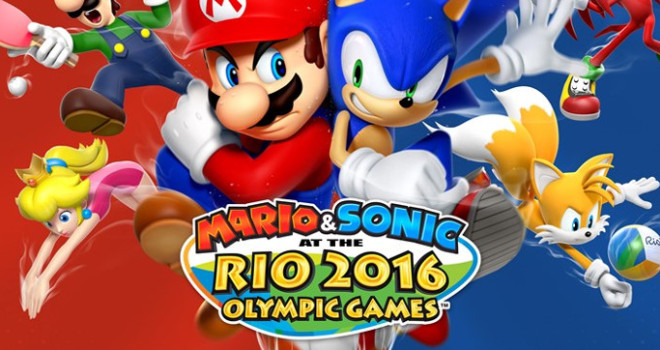 Did you ever have something in a game that really rubs you the wrong way and no matter what you do you can’t get passed it? It scan be a small thing, which isn’t even that big of a deal. But it just angers you every time you think of it?

I had that with Mario & Sonic at the Rio 2016 Olympic Games for the Nintendo 3DS. It’s not a big thing and by no mean breaks the game. I’ll get to exactly what that is later on in the review. (If you follow me on Miiverse you’ll already know what it is.) It certainly doesn’t run the game, but it did lower my final score.

Aside from the above, I loved this game. The number of events included is extensive, the control options are varied, and the single player mode is actually quite fun.

You can compete in all of the main events right off the bat by choosing quick play mode, but the real treat in the game is the “Road to Rio” mode. In this mode you’ll play as your Mii character as you train and compete in events in order to claim gold medals. You can choose to either train at Mario’s Gym or Sonic’s Gym, with the training events differing depending on which side you choose. Not to worry though as you’ll be able to play both sides.

The story isn’t really that deep, but it is fun to play. As you play through the Road to Rio, you’ll earn Training Points (TP). Get enough TP and your Mii character’s level will increase. The higher the level, the more outfits your Mii can choose from. You can also boost your Mii character’s abilities further by equipping all sorts of sporting gear, hats, and full outfits. You can also purchase special equipment for some of the events, which can give you a boost. From golf clubs to boxing gloves, there are lots of ways to enhance your skills.

As you play through the story mode you’ll meet secret characters and, if you best them in the plus event they challenge you to, you’ll unlock them for use in the free play mode.

Another nifty thing is that there are way more than the 14 regular and 14 plus events in the game. In addition to these sports, the game also includes training events which you unlock by taking part in in Road to Rio.

Like I mentioned before the different events all have very different controls. Some of them use just the buttons while others may use the stylus. Some other events make use of the gyro-sensor built into the 3DS system and even the microphone is used at times.

While I do like the variety of controls, some of them feel a bit gimmicky.

Sure the stylus has become a staple of game play on the DS and 3DS and I don’t mind that. I however don’t like using the gyro-sensor to play some of the events, which becomes counter-intuitive and a hassle to do.

One training event for example is basketball. In the event you shoot free throws. You do this by holding the 3DS in your hands and use the gyro-sensor to aim your shot. But in order to shoot you have to thrust the system forward abruptly.

Anyone would feel a bit foolish playing the game in public with this game mechanic. Aiming with the gyro-sensor is quite fine, but perhaps using the stylus to swipe up on the touch screen would be a better way to shoot the ball. In a way that doesn’t make it feel like I’m going to rip the top screen off it’s hinges.

Synchronized swimming also utilizes this same thrust mechanic for controlling the training event. These two events ended up being my least favourite, just because of these controls.

By far my two favourite events in the game are football (soccer) and golf. They are the top two tier events in the event menu and the most fun to play. It’s perhaps because these feel more like fuller events and not quick burts of play like the 100m dash or hurdles. There is a bit more depth to these events and they have more customizable options.

Mario & Sonic at the Rio 2016 Olympic Games makes great use of Miis in the game, with something to be said for having my Mii training and competing in the Olympic Games. This inclusion of the “Road to Rio” single player campaign is a great addition to the franchise. Another neat included element to the game is both StreetPass and the “Pocket Marathon” mode. In this mode you collect steps by keeping your Nintendo 3DS in sleep mode when you’re out and about. The steps you take, in addition to collecting the standard system play coins, also count towards the total goal of walking a marathon. Each step will be recorded as measuring one metre of the total 42.195km marathon distance.

As well if you pass by anyone in your travels who has the game, their Mii will show up in your game to cheer you on. It would have been nice if the other Miis saved on my 3DS system would have also appeared as spectators, or NPC opponents. For taking part in the game each day you’ll be rewarded with apples for use in the Road to Rio mode to buy gear, as well as special gear.

This isn’t a huge thing, but is a nice little addition that promotes playing the game daily.

One thing that seems to be lacking in the game is online multiplayer. This seems odd since this is a game about a global competition and you can’t play the game with anyone online. Sure there are online rankings included, which you can update one event at a time, but it would be nice to be able to play against people online. How is this not a standard feature for a sports title?

While there is no online gaming, there is a fully fleshed out local multiplayer option. The game supports local multiplayer with up to four players, and also has a pretty robust multiplayer option via download play. Pretty much all of the events can be played with four players and only one copy of the game. This is fantastic, especially since many download play titles are limited to only a handful of characters, courses, or options.

Now here’s the part I mentioned above that is a huge miss in the game.

Allow me to elaborate.

When you select from one of the events, let’s use beach volleyball for example, you CAN’T choose to play from any character. Instead before you can select your character the game gives you SEVEN to choose from. These are the only characters you can choose from.

Now when you factor in the fact that of these seven characters Mario, Sonic, and your Mii can play in every event that leaves you only FOUR to really choose from. Three available at the start plus one of the unlockable characters.

Want to play beach volleyball with Peach, Rosalina, or Daisy? You can’t. Not an option. You can play as Donkey Kong or Tails though.

I can’t figure out why the developers of the game would implement something so needlessly restrictive.

Imagine if in Super Smash Bros. you were limited to only a handful of fighters to choose from depending on the stage selected.

This is AS ridiculous as that sounds.

As much as I like playing as my Mii I would also like to play the events as whatever character I so choose. Playing Mario Kart 8, Rosalina was my go-to character. I raced every race as her. I would like to be able to do the same in this game. Rosalina can ONLY be used in Rhythmic Gymnastics.

This is by far the biggest let down of the game. Especially if your character preference isn’t playable in your favourite events.

This boneheaded decision aside, Mario & Sonic at the Rio 2016 Olympic Games looks beautiful and sounds great! The environments and event locals are beautifully detailed and look fantastic in 3D. Some fine attention was paid to these in the game and it’s definitely appreciated.

As well the music in the game is great. In fact you can listen to the full game soundtrack here. I’m not sure if the theme to the game is also going to be the official theme for the games, but it definitely suits the games.

As with most new Nintendo games, this game does support amiibo. Both the Mario and Sonic amiibo are compatible with the game. They can be used to give your Mii a power boost during one day of play on the Road to Rio. These are the only two compatible amiibo in the game, which is odd since there are nine available other amiibo of playable characters in the game.

Over all, if you don’t mind the fact that Mario & Sonic at the Rio 2016 Olympic Games boasts the most expansive and yet restrictive lineup of playable characters I’ve ever seen, the game is pretty great. It’s a fun sports title that is a lot of fun to play.