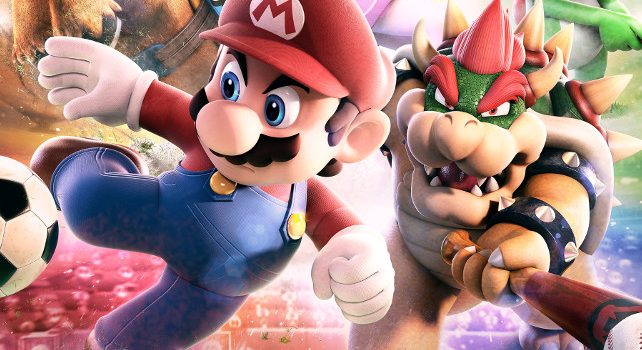 I’ll admit that I have a soft spot for the Mario spinoff games. No players gaming experience would be complete with a spin around the racetrack of Mario Kart for example, but I’m talking about the sport titles. From golf to soccer, baseball to 3-on-3 basketball, the Mario crew has done it all. The latest Mario spinoff title for the Nintendo 3DS brings five sports together in one package, and does all of these sports justice.

Mario Sports Superstars features five full-on sports and features Soccer, Tennis, Golf, Baseball, and Horse Racing. This game is what you get if you took four of the previous full sports games Nintendo has given the Mushroom Kingdom treatment to, streamlined the presentation, trimmed some of the fat, added a new sport, and released it as a fresh title.

Let’s look at the sports individually.

I spent the bulk of my time playing between two sports – soccer and baseball. Both of these sports get a lot more airtime in the real world and I’m more familiar with them. Baseball has a lot of depth in Mario Sports Superstars. In the team sport you can choose two of the mainline characters to captain and co-captain your team. You then fill out the rest of your team with a selection of minor characters consisting of toads, hammer bros, koopas, and more. You can select between multiple colours and styles of the characters, each with their own unique stats and pitching styles. You can put any character in any position and set up the batting order to your liking.

The sport of Baseball in the game has a lot of depth and detail, all of which you would expect from a baseball simulation game but wouldn’t expect necessarily from a Mario title. In addition to customizing your batting order and positions, you can also control the depth of your infield and outfield, attempt to pick off base runners, bunt, and more. There is also the option to let the game control your outfield or do so manually.

The other great team sport is of course Soccer. Now there isn’t much new that you can really do with the game because soccer is soccer, but there are a few nice Mario twists to the game. Like with some previous soccer titles, and the bulk of the sports games, there are special moves you can perform. As you play the game you charge up a power meter which can be discharged for a super shot. The type of shot differs depending on which character is taking the shot, but the powered up move can be the difference maker in a close game.

The special shots can be turned off though if you’re looking for a more pure soccer experience. You can also optimize some of the settings and decide if you want to have penalty kicks or extra time turned on or off. The total match length can also be modified, however you can’t choose to play a full time 90 minute match. The minimum game length is five minutes with fifteen being the maximum. Settings can’t be modified in the tournament mode however. amiibo cards scanned in the game can also be played in this mode letting you play with slightly boosted stats for scanned characters.

Tennis and Golf also have the special Mario play styles which can be disabled if you prefer to play without the trick shots and special moves. These special flavours of moves are a staple of the series, but it’s nice to be able to play without them if you crave a simple match. The addition of horse racing is also a nice simple addition. While it’s not as fast and furious as the Mario Kart racing series, it is fun to play. The game also has a pretty comprehensive stable mode which allows you to raise, dress, and take care of your steed.

While the sports aren’t as fully fleshed out as they are in the single sport games there is more than enough packaged in this game to make it worthwhile. Mario Sports Superstars is definitely a home run Mario sports title.