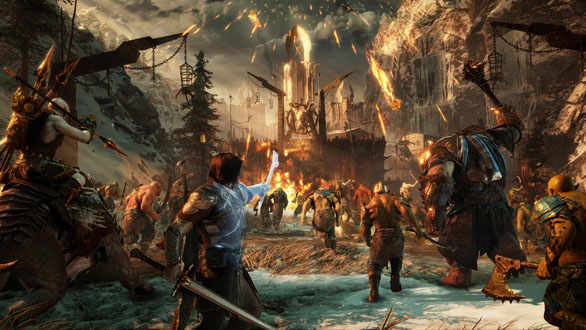 It took awhile to get far enough into Shadow of War before I felt I was ready to review the game. Don’t get me wrong, it’s amazing to jump back into the nemesis system and start taking down orcs. Let alone that the intro area of Minas Ithil is a breath of fresh air for the series right from the start. The dreary ruins of Mordor are replaced with a sprawling city that almost has a Roman inspiration to it. Right down to a huge Colosseum that makes for some great encounters later on. It feels impressive. The city itself is even set into a pine forest which you do get to explore the edge of at an orc encampment. Shadow of War starts with luster and spectacle which shows off just how improved the sequel is.

Many reviewers have been quoting a good solid twenty hours or so to get into the meat of the game. Fortunately I was able to clear through into Act Two faster than that. It still took a bit to progress into the siege sections but by the second act you begin forming your army. There’s enough in the first act to keep you interested and playing. Really the content itself borders on being high enough quality that you feel spoiled by it. All of the cinematics and events going on feel as if this game could have been it’s own movie trilogy. It fits in with the Peter Jackson films well and that quality takes it from just being another romp through Mordor to being something special. Building my army was fun, even if it was a bit taxing at the time. The nemesis system is a fantastic setup that allows you to battle randomly generated orc captains, and now in this sequel, convert them to your side. Enemies don’t just wait around for you either. There are set battle missions you can tackle that are generated to make things more interesting. Maybe two captains are planning to battle each other to prove their worth, or perhaps one wants to take down a huge wolf like caragor. All of these events shuffle the ranks in the nemesis system whether you participate or not. You’ll also be able to just come across some captains in the streets to take down as well. You can also turn them into followers.

Interestingly, followers are also shown on the actual nemesis army screen for that area. So everyone is just kind of jumbled together. Bad guys are red, your followers are blue. I’m not sure if followers were a part of Shadow of Mordor but it seems they were at least a bit. My main focus was actually on the starter area of the game and just enjoying the nemesis system of the first title. I sadly didn’t expand out in the world until many months later. Though that does say something about the nemesis system. It really is just that much fun. What Shadow of War does add is siege battles. You can assign upgrades to your followers and the more levels you gain for Talion, your main hero, the more followers you can bring into battle. Sieges pretty much work out to be storming a keep and then capturing two points before going in and battling the war chief. If you want more of those, you can even battle other players keeps online. It’s just copied data and not a direct PVP battle, but you can earn chests and such from battling it out to overthrow those keeps. Like most of Shadow of War, it’s fun. You’ll want to go back in and just try to bulldoze another army for some extra loot.

As for all the concerns about microtransaction chests, I really haven’t had an issue with them. I’ve heard the concern that they can give you an unfair advantage in a single player game. Really though I just haven’t received anything from the chests that came with my version of the game, or that I’ve earned, that really unbalances the game. They’ve been fun goodies but really I’ve earned some gear that I just haven’t swapped out in awhile. A cloak I received quite early in the game was so powerful that even the extra defense later loot drops offer I won’t give it up. Gear is actually helpful since epic loot includes skills that you unlock by completing item specific challenges. Then you spend a bit of in game currency on unlocking that ability and there you go. This makes collecting loot a lot of fun since you never know just what will be included on that specific piece. There are swords, daggers or stealth, armor, cloaks, bows, and even runes to help boost your stats. Nothing seems to be level specific either so the gear you get is the gear you can use. In general you earn gear by killing captains but sometimes missions reward loot as well.

Currently I’ve unlocked about four or five different areas. Considering each one has it’s own nemesis system pool, the storyline is solid and entertaining, and this game just builds on what made Shadow of Mordor so great, I highly recommend it! At times things got bogged down but that was mostly from me wanting revenge on orc captains who had killed me. Sometimes they’ll just have one insane stat like “No second chance.” So if that captain knocks you down, you’re done for. One such orc that I wanted as a follower kept getting that. He surrounded himself with allies and it made combat difficult to whittle down his health. In the end I did finally convert him to my cause. I’m probably a good twenty four hours in or so to Shadow of War. Typically we either don’t play a game to review that long or we’ve already beaten it by then. Considering I’m still enjoying the game and there is a ton of story content left to go, it’s clear this title is a win. I haven’t even made it to the fantastic battles I had during the press event we went to and that was a story mission. Shadow of War builds upon what you know and love from the first game by letting you fly on drakes and take over keeps. It’s a sequel that says, “You liked the first game? Hold my beer.” and just keeps going. Just from the start I was floored by the beautiful yet war torn Minas Ithil. Since then I’ve played the game for a day straight and I still have more to go.

Middle-earth: Shadow of War rocks. Despite the rare hiccup like getting caught on a piece of scenery that can’t be climbed and having to replan your escape route, this is a solid game. Really that’s the only thing that knocks Shadow of War down a touch. Otherwise the game is typically fun and responsive. What I believe are new skill tree abilities help you zip around even faster as well with double jumps and faster climbing. This is very helpful when you’re leading your forces through a siege. If you’ve been eager for more of that Middle-earth adventure you love, you won’t be disappointed in Shadow of War.