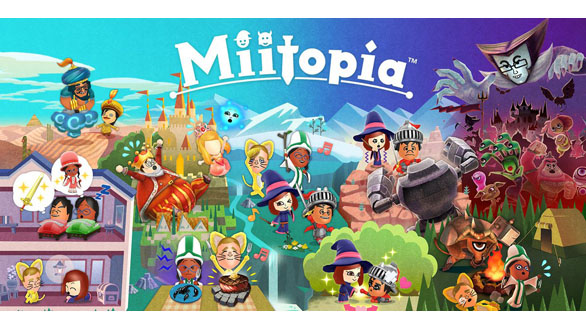 Nintendo has done a great job at expanding social and interesting interaction in their games with virtual characters. For years Animal Crossing has given us a randomly populated town of characters to visit. Tomodachi Life expanded on this and brought Mii’s into the mix. In both games, characters built relationships. But it was the conversations between characters that really made Tomodachi Life interesting. Miitopia doesn’t delve that much into this interaction, but it’s still there in a solid RPG game. It’s literally a mix of Tomodachi Life and a turn based RPG.

I’m sure by now you’ve heard the story but Miitopia focused on a character known as the Dark Lord who uses magic to steal the faces of all the Mii’s across the land and apply them to various beasties to make them monsters. Why is this cool? Because like most Mii software it pulls the data from a wonderful mix of player created content online. Since it’s all made by other gamers, save for whatever you add in, this means a huge combination of random pop culture characters are possible. In general the locations you visit could end up looking like someone knocked off a Funko Pop figure wall with Peter Griffin, Robocop, and a Metroid all being people you meet. It’s not all random though. You can actually recast people, even after they’ve been chosen. So if you wanted to make a full Pokémon themed adventure you technically can. You’ll just need Mii’s to cover those characters. Even the main villain can be replaced and made into anyone you see fit. For me, I actually used one of our animated franchises as the basis for my characters. It’s in this strength especially that makes Miitopia a grand adventure.

As an old school gamer I’d often find myself naming RPG characters after friends or characters I’d created. Miitopia allows you to even make those characters look like the people you want them to. So not only am I playing a fun RPG, but it’s cast with my own creations. For fun I’ve left most of the regular NPC’s as random characters. After all, you never know what funny combinations you’ll end up with. I mean, the cute couple from the first town in my game was Peter Griffin with Misty from Pokémon! That took awhile to stop laughing from. But that’s just it, Miitopia is best played as a casual game like Tomodachi Life or Animal Crossing. You check in, chum around with your characters, maybe do some old school level grinding, advance the plot a bit, and take a break. It’s in that way the game as stayed fun for me. Essentially each area you come across on a Super Mario World like map takes you into a side scrolling auto-walked path. Your party hops along, chatting along the way, and coming across random battles. The dialogue seems to be pretty random but there were times it combined together into funny moments. Combat is simple turn based battling with some additional skills as you befriend your party members and level up.

When you reach the end of each area, you’ll enter an inn. This is where the game delves back into Tomodachi Life territory with the inn setup almost being like a mini apartment building from the latter game. You’ll feed goodies you found along the way to your characters to boost their stats for one. Guess what? They have certain likes and dislikes just like Tomodachi Life! So I watched my pop star cringe over her least favorite food every time I force fed her to power her up, and watched my happy go lucky rugged girl enjoy goblin ham like a champ. On top of that you split off your characters into different rooms and they develop friendships this way. Getting closer means they also develop new abilities to help each other in battle. You’ll also be treated to occasional conversations between the two… just like in Tomodachi Life! Customization really is the name of the game in Miitopia. You’re given a fun fantasy world to play in, but the real joy is playing around with your characters. Get a new item you don’t like? Pop into your stuff menu and you can actually change the appearance of one item for another! You’re not restricted to using the best gear and looking ugly. You can dress your Mii’s up how you like and even use items earned from scanning in Amiibo figures! It’s all about making the game look like what you want it to. In that way, there need to be more games like Miitopia. Look at Destiny with everyone wearing high level gear with the best perks. World of Warcraft got it right when you could transmog items to make your best gear look like whatever you wanted. Miitopia allows for that cosmetic appeal as well.

The best part about Miitopia is that it’s what you make of it. If you don’t like the cast, you’re not going to have a fun time. What if you’re a big sports fan though? Next thing you know you have a cast of your favorite NFL players rushing along through a fantasy world to save their fellow Miis. Want a Walking Dead cast instead? Go for it Carl! The possibilities are limited only by your imagination. Even then with the game spitting out random NPC’s at you, it’s quite easy to get inspired. As I said earlier, Miitopia feels like a casual game and the intro to each play through seems to push that idea. Each day you can log in and nab yourself some game tickets to spend on some inn activities to earn more items. That aside you can spend your hard earned gold on sending off your characters to go shopping too. All of this is wrapped in an appearance of the characters being their own selves. You give the gold to them to go buy the gear they suggest. Sometimes, they come back with something else because they felt like it.

The game is all about fun. There’s combat, leveling, gear, cosmetics, food items your characters will like or dislike, and Tomodachi Life like interaction at times. Let alone the Mii characters that are brought into your game. It’s a mix of great content holds up as a solid production. I really couldn’t be happier with Miitopia and I highly recommend it!