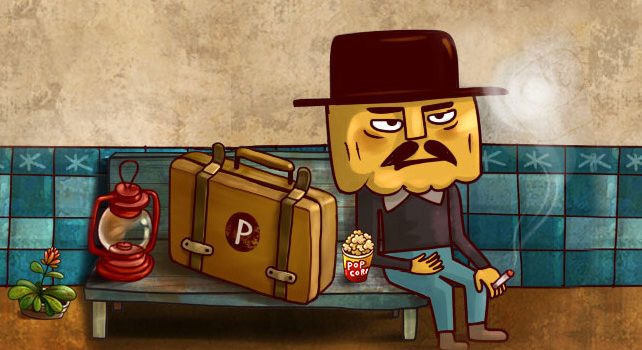 Mr. Pumpkin Adventure is a puzzling little game which is so odd that it almost defies description. In the story of the game the protagonist of the game – Mr. Pumpkin adventures in the strange vegetable kingdom only to find his memory.

Basically the game is a point and click (or in the case of the Wii U a tap and tap) game where you try to solve puzzles and advance to the goal. The game pretty much throws you into the thick of things with little explanation. After a brief comic strip style narration you are left to start the game with little idea of what to do. This is where the tapping begins. If you’ve ever played a point and click puzzle game then you know what this is all about. You tap on items and the environment to interact with them. Lights may turn on, doors may open, and you may also pick up or interact with items. It’s a matter of tapping the right items in the correct sequence to find your way to the end of each level and on in the story.

Though that’s easier said than done.

The world of Mr. Pumpkin is a strange one, however it is beautifully illustrated. Somewhere between a Tim Burton and Richard Scary drawing, the backgrounds and elements are odd to say the least. But it’s actually the oddity that adds to the charm of the game. Interspersed with the surface puzzle elements are more detailed puzzles within. Things such as turning wires to complete a circuit to entering a math formula into a calculator, they range from simple to downright tricky. Mr. Pumpkin Adventure is definitely not a game that you can breeze right through on your first go.

Luckily the game does come with a nice hint system. After fulfilling a small platforming level you will be treated to a tip, though these don’t give anything away. The hints point you in the right direction of what you should be focusing on next without actually giving you the answer.

If you’re someone who enjoys logic puzzles (as well as illogical puzzles) and has a large helping of patience then this will definitely strike your fancy. It’s certainly an enjoyable game if you have the patience.