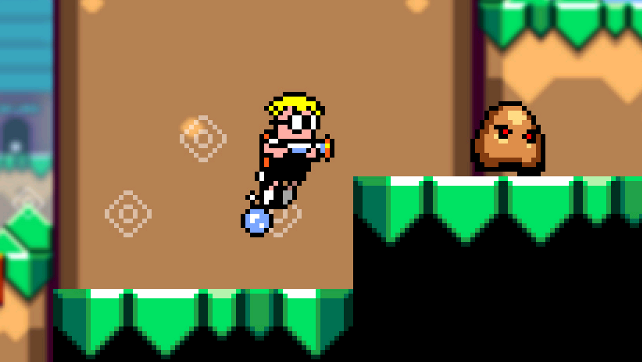 Mutant Mudds Deluxe is a fun little ’12 bit’ platforming game with just enough simplicity to be easy to pick up and play yet enough difficulty to keep even the most seasoned gamer challenged.

Mutant Mudds Deluxe is the beefed up edition of the Mutant Mudds which was originally released on the Nintendo 3DS in 2012. The Deluxe upgrade made it’s debut on the Nintendo Wii U a few months ago and has now made the jump to Steam, with a release on PS3/PS Vita coming later this month.

The game has a very simple let up with the hero, Max, springing into action after a meteor crashes down to Earth unleashing the Mutant Mudds on the world. Armed with a heavy-duty water cannon, Max has what he needs to vanquish the Mudds. Max must blast and hover his way across the soiled landscape to seek out mysterious Water Sprites. Legend says collecting all of the mysterious Water Sprites will wash the filthy Mutant Mudds away for good! 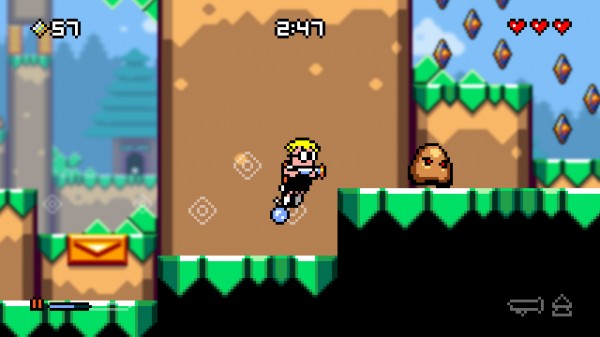 On the Nintendo 3DS the developers used the 3D aspect of the system to really show you the depth. In the Steam version blurring is used to separate the layers, which works just as well.

There are multiple types of Mudds in the game, each one with their own movement pattern and challenges. Some of the smaller ones move around left or right while others stay stationary. There are also flying ones. Then there are the more challenging ones. One has a shield and will swing a sword at you if you get too close, which you often do. He’s also quicker than you so look out. Another one shoots at you while yet another floats above and drops bombs. There is certainly a lot of strategy and patience needed in playing certain levels.

Did I mention the platforms that appear and disappear? How about stationary enemies and obstacles which move from the background where you can safely pass into the foreground where you can be harmed. There is also a tricky cloud that can BLOW you into the foreground, sometimes to your doom as you land on spikes or fall out of the level. Tricky tricky. 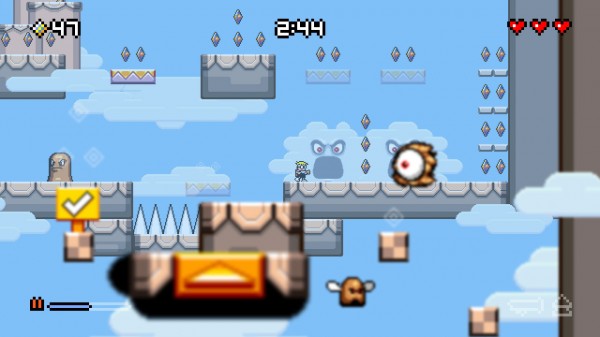 Luckily one thing that you do have is unlimited lives. You have only three hearts of life to complete each level with no health power ups in sight. Though if you ready the checkpoint in the level you will return there will a full three hearts should you perish.

Some of the levels you won’t be able to play right away. The main screen shows just sixteen levels to play, though each of them has a bonus level hidden within. Some of these bonus levels also can’t be reached without the aid of special powerups, including a more powerful and longer reaching shot upgrade for the water cannon and the ability to hover for a longer time and greater distance. You can get these powerups (of which you can only use one at a time) from “Granny’s Attic” after you have collected enough gems within the levels.

The mirror ghost levels add another tricky element to the levels in that for the most part you can’t shoot the ghostly enemies and have to purely avoid them. Great challenge and frustratingly fun. The music in the game is also very well done.

Overall Mutant Mudds Deluxe is very fun to play and is as hard as any hardcore gamer could want. If you like platformers and are looking for a great new and unique title be sure to give this game a shot.