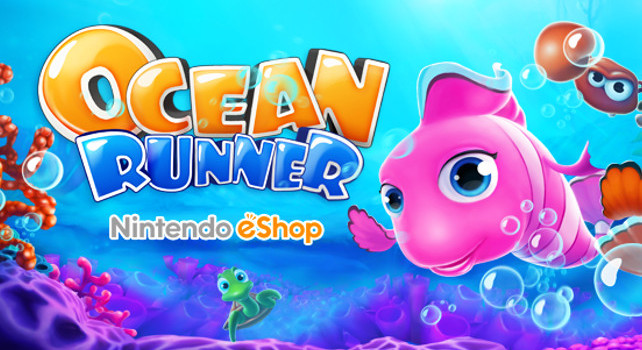 Endless runners are always hard to gauge. Will they be just mindless and endless running or will they have some substance to them. As easy as it is to just play an endless runner they tend to wear away at me very easily. But Ocean Runner looked like it might have had something more than meets the eye. Boy was I right.

Here’s the story of the game. Yes, there is actually a story in the game.

Meet Gilbert, a bachelor fish who has fallen deeply in love with the beautiful Pearlina. Like all stunning fish, Pearlina’s one and only dream is to have the largest pearl in the ocean and like any love struck fish, Gilbert is on a mission to find it! The game plays with Gilbert swimming and collecting shells. You control the fish on the bottom screen as he points towards the top. You stay stationary on this screen while the environment moves passed you. You’ll need to be quick to avoid obstacles in your path, such as other fish and sea life, as well as the coral around you. It starts off slowly paced but as you progress the scene starts to move more quickly.

A nice addition is that you don’t only have to move and dodge, but you can attack too. A quick press of the [L] or [R] button will cause you to do a quick dash and push through an enemy creature. The touch is nice and gives the runner a bit of action. The game also supports control via the stylus, analog stick and motion controls, which I found the most intuitive.

Of course you’re going to eventually get hit and the level will end, but the game is far from over. As you collect the shells in the level you will be able to use them to buy items and power ups to help you on your quest. You can buy things like a propeller that gives you a headstart in the level (useful when your current challenge is to reach a specific distance in the level) or a lifebelt which give you continues. You can also buy upgrades to the powerups found in the level and even new looks for the fish.

To collect the pearls you need to complete missions in the levels. Between levels you’ll see these displayed on the top screen. Best part is that these missions are actually reasonable and compounding. For example if your mission is to swim 2000m you won’t need to somehow do this in one shot. The number counts down so you need only swim a collective 2000m in order to finish the mission. And when you do so you’ll be awarded with a pearl. Collect enough pearls and the story will progress. Another detail that is well done is the look of the game. Ocean Runner is a beautiful game to play. The colours pop and the environments are detailed and engaging. Playing the game is like playing a cartoon and it’s great fun to do. The music in the game is also very well done and suits the game play beautifully.

One very minor thing that I noticed that wasn’t great was the way the environments moved between the top and bottom screens. It’s something that is more the fault of Nintendo than Teyon though. The game was clearly designed with the 3DS in mind. I played the game on the 2DS. The top and botton screens are closer together on the 2DS than they are on the 3DS. So while the transition between top and bottom screens would be flawless on the 3DS, the flow is somewhat stunted on the 2DS with a slight delay when items move from top to bottom.

Regardless, if you’ve played an endless runner before, forget everything you know about them. Ocean Runner provides a surprisingly rich gameplay experience in a mostly bland genre. And for only $2.99 it’s money well spent.