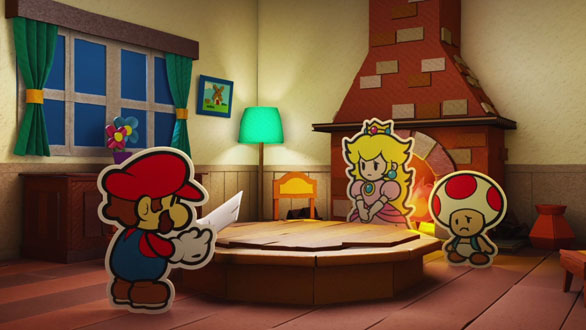 Paper Mario Color Splash is a comical and nostalgic entry in the franchise that almost takes on a 90’s PC adventure game vibe. With less emphasis on RPG elements in this release it may feel awkward at first, but it’s a worthwhile journey to take. Some of the set pieces along the way really make for great additions to the story. Other reviewers have touched upon some of the great moments like the Pirate Ship and Haunted Inn.

Much of this content is decently lengthy and encourages exploration which really adds to that classic adventure game feel. I couldn’t decide if the game is actually hard and we just got lucky at times, or if exploration is done just right to keep you progressing. There has been the odd time I’d wandered about trying to figure out where to go next, but between quick searches online or stumbling across characters who point you in the right direction, the game has flowed well. Areas are split up in a Super Mario World style overworld map, as seen below, allowing you to go back and forth between different stages quickly. 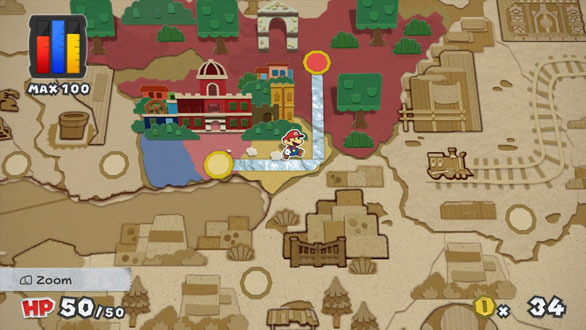 Really it’s the story to get into Color Splash for. Princess Peach has received a colorless Toad in the mail and she takes him to Mario. They set off to Prisma Island where the Toad had been mailed from to try and discover what is going on. Upon arrival they meet Huey, a talking paint can who is distraught that the port town is missing it’s Big Paint Stars. It quickly turns out Shy Guys are using straws to suck the paint out of Toads, flowers, the walls, everything! These colorless splotches can be filled in by Mario’s new paint hammer. You’ll use paint from the three primary colors, and get more paint from hammering various objects, to color in the world again.

This gimmick is actually pretty neat since it gets you exploring your surroundings more to try and get 100% in each area. Unfortunately the game doesn’t give you a big notification when you do get 100% of the spots in a level. Instead you’ll just have to check out your stats menu on the GamePad which isn’t open while walking about. Info like that and a more constant reminder of how many cards out of your maximum you have would have been helpful.

Cards are another thing altogether. As mentioned above, you don’t really have RPG elements in the game. Sure you battle it out like in most Paper Mario games, but you don’t level up or such. Instead, finding Big Paint Stars rewards with more HP and gives you an eventual advantage to one shot certain enemies outside of combat. At first the card system can feel cumbersome. You’ll get a display of cards for jumping, hammers, fire flowers, your typical attacks, on the GamePad. After selecting your attack you’ll paint it in if it isn’t already to power it up. Finally you’ll flick the cards at your TV with the stylus. Like with many Wii U interactions, this is a cool interface that feels unique. It just takes a bit to get used to. Battle cards aren’t complex. They just activate various moves and serve as your way to attack enemies. 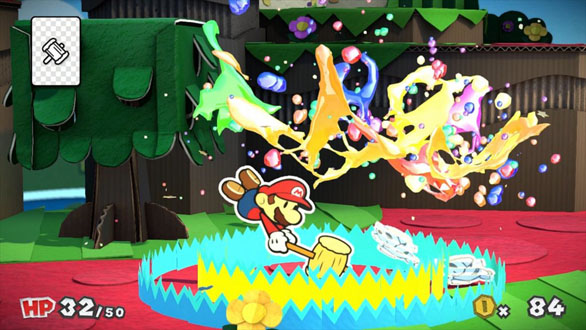 One tricky part however is making sure you have the right kind of cards on you and don’t just stack your deck with stuff that will get you stuck. I’ve had some challenging moments, but I haven’t had to reload because of battle cards. Thing cards are another story however. They are big attacks that you can use in combat, but they are also items you’d find in an adventure game to solve puzzles. One ability you’ll learn early on is to cut away parts of the environment. This can at times allow you to drop in one of these Thing cards to solve a puzzle. If the game is ever awkwardly bashing you over the head with a word that relates to one of your Thing card items, take that as a massive hint. There has been the rare time we got stuck this way. You do really need to put the breaks on in each area and explore around. You can also talk to Huey for hints as well by pressing up on the directional pad.

Those frustrating moments are few at least and most of the time the game does a good job in making you feel clever. The rare time you may tear an area apart only to figure out that if you just walk into the background and try to walk behind the scenery, you’ll find a ramp up to where you want to go however. It’s those moments I’ve felt incredibly lucky on. A decent number of times we’ve said, “That could have really drug out if we didn’t find that.” I don’t know if anyone has become stuck in any of those situations, but at times it just feels like we stumbled upon what we needed by chance.

I won’t go into much detail about it, especially since I haven’t beat the game yet, but there is one personal frustration I have with this title. For years I’ve been waiting for the cast of Super Mario 2 USA to return. There’s even a mention of Wart by one of the Toads in this game. The Shy Guys are his minions! I’d love to see an expanded universe Mario game and this one really could have been it. I’ve poked around a bit online but haven’t seen any reference to Wart being in the game. There is a big cast from Super Mario 2 USA that added new dynamics to the flow of a Mario title. I’d love to see any of the bosses return. Really I’d love to see a return to SubCon itself. I’d just give up, but there is so much Mario 2 nostalgia in this game! I’ll be eagerly awaiting anything like this to ever be released. 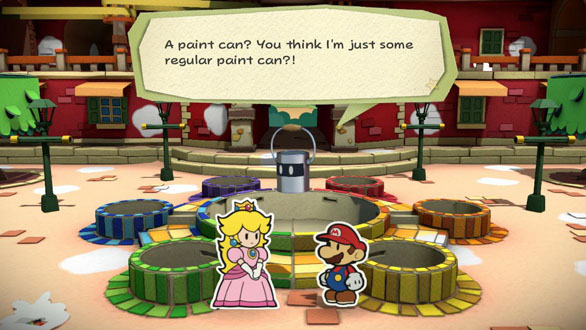 My personal obsession with an old Nintendo game from 1988 aside, Color Splash really does have a lot going for it. The story is interesting and keeps you playing. Various characters you meet along the way are fun, as are the areas you’ll explore. Many times the game did make us legitimately laugh out loud and it really has quality writing poured into it. Really the only awkward thing that makes the game drag a little is combat. It’s strange to say for a series that started with RPG routes, but I could have done with less combat and more adventure game content. There are times you’ll be referenced to return to a previous area and talk to someone there. I was more interested in that content than really doing much of the battling. It isn’t that the combat is bad. It’s more so that the game’s story is so fun that you just want to stomp or hammer the enemies out of the way to enjoy the content instead. At least I did. That and wandering the land trying to paint every last spot in each area.

Visually the game is absolutely beautiful! Color Splash uses the paper craft style that the series is known for and makes it cleaner than ever. When you actually look back to even just Thousand Year Door, the art style really stands out as even more realized. The world comes alive as you unfurl paper bridges, watch some of the scenery tremble with each hammer hit, and even as enemies and friends react like crumpled paper cutouts. The style looks great and the simplistic character animation is enhanced by the actual motion and turning of the paper cutouts they are painted on. 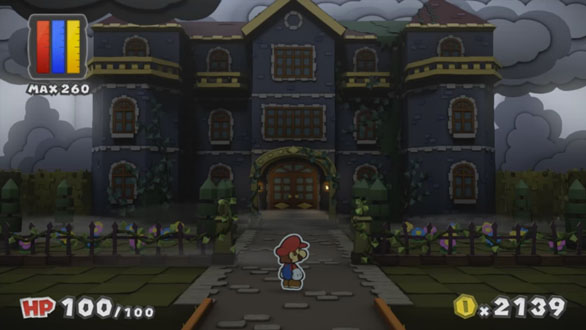 Paper Mario Color Splash really is worthwhile. It has the feel of the series you’ve come to know and love in the story, with a new card combat system that while different doesn’t feel out of place. I usually love grinding for levels in RPG’s, so that’s probably why I’ve personally taken to the story more since that’s absent in this game. You are rewarded with more maximum paint after collecting hammers that drop after battle along with some coins, but I love the stats of previous releases. Again, that doesn’t devalue this title. It just makes it different.

You’ll find lots to enjoy in Color Splash. The game feels like a quality Nintendo product. Sure we can nitpick various elements about it, but they aren’t really that big of a deal. Besides Wart, I want 16 games featuring him for the 30th anniversary of Super Mario 2 in 2018 Nintendo! Combat and cutting out areas are the only main uses of the GamePad which keeps it from feeling overused. Looking down at your cards may feel cumbersome at first, but it’s something you get used to that isn’t overly intrusive. It’s a fun adventure and a good value for the lengthy time you’ll be spending on Prisma Island. 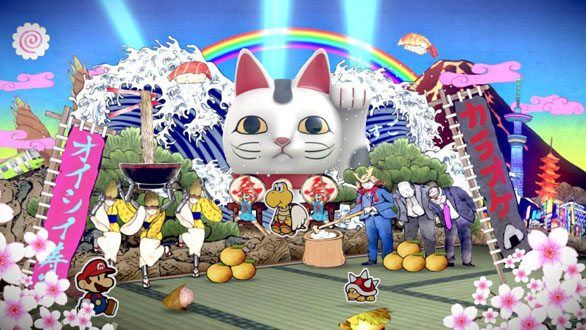