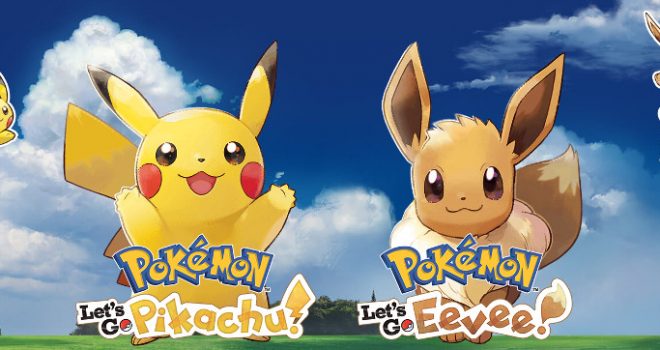 While at heart it’s a remake of the original, the games also take a lot of cues from the mobile game Pokémon GO. Gone are the random encounters of Pokémon in the tall grass. These are replaced with visible Pokémon that can be encountered or avoided all together. While it’s a stark departure from the conventions of the traditions of the game, it’s a nice change and one that I hope they continue into the rest of the games.

Being able to see the Pokémon before you begin an encounter, much like many action RPGs, is huge. One problem I’ve always had is that when I find a Pokémon that I want to catch I can spend hours initiating random encounters until I encounter my desired Pokémon. Often I end up becoming overpowered as I camp and grind through until I find what I’m looking for.

Of course the even more immediate and significant bonus is the ability to avoid and get through a dungeon faster. Being lost in a dungeon and hitting a random encounter every few steps can really make a dungeon become grueling and tedious.

It feels like Nintendo and Game Freak were testing these new features in a more casual game before their new core RPG comes out next year. I personally hope that they carry over.

One of the core gameplay elements in the game remains the same. You’ll play as a newly of age Pokémon trainer who emerges from Pallet Town on his way to the Elite Four. You’ll have to battle your way through eight gyms and collecting badges, challenging Team Rocket, and capturing Pokémon and filling your Pokédex. Everything that makes the games fun are packed in here too.

The game also has some integration with the mobile hit Pokémon GO.

Besides the inspiration for wild encounters, you can also transfer Pokémon from the mobile game into Let’s Go. These one way transfers let you bring some of the first generation Pokémon you’ve been collecting on GO into Let’s Go. These get transfered into a new area in Kanto called GO Park where you can then catch them and use them.

The Pokémon GO Park replaces the Safari Zone in Kanto. The removal of this area somewhat switches up some of the item placement in the game as a character that you meet there is now in a different location. There are a few other changes too.

In the games you’ll now have a buddy Pokémon rather than your pick of three elemental starters. The buddy depends on the particular version of the game you choose, Pikachu or Eevee. Don’t worry though. Getting the original three starters is easy enough in the early game.

One of the biggest changes involves the encounters with wild Pokémon. Whereas in the traditional games you woukd battle wild Pokémon and catch them if you wanted it, in Let’s Go all encounters are catch encounters. Just like in Pokémon GO you throw balls at the Pokemon and feed them berries to make them easier to catch. Personally I liked the battles. While they typically took longer it’s good practice to hone your skills.

One downside with the simple catch encounters is that there doesn’t seem to be any consistency in them. In Seaform Cave for example I encountered a Jynx. It had a red ring which means that it is more difficult to catch. After expending a dozen pokéballs and berries the Pokémon ran. Another Jynx right away yielded the same result. Lost balls and no Pokémon. Then right after that I encountered a Dewgong with the same red ring. Two pokeballs and no berries later I had it caught.

It was hard to figure out if an encounter was going to be easy or not.

Not all Pokémon encounters were simple catch encounters though. Story based battles, as well as catching Pokémon in GO Park were preceeded with good old fashioned battles.

Despite these little quirks the games were lots of fun to play.

The game looks great and very reminiscent of Omega Ruby and Alpha Saphire from the Nintendo 3DS. The iconic music from the original games were also redone. It’s both nostalgic and epic.

Control wise the game was a mixed bag.

Handheld mode plays and feels just like playing previous games in the series, though harkening back to the games in the Game Boy generations before the advent of the second touch screen. In fact the touch screen seems to be an oversight entirely. Despite the fact that the Switch has a fully functioning touch screen, the touch screen is virtually unused save for a bit of playing with your partner Pokémon.

Despite large menu buttons you can’t navigate the menus with the touch screen. You also can’t tap the screen to advance story dialogue or battle dialogues. Playing the 3DS games with one hand was THE way I played a lot.

The same thing made virtual console editions of Pokémon games on 3DS a pain as tapping the touch screen there would pop open the VC menu.

This lack of touch screen controls is unfortunate and something I hope they fix come 2019. In TV and tabletop mode you can control the game with just a single Joy-Con. Actually you have to use a single Joy-Con to play the game and can’t use a Pro Controller or Grip to play. As the game is a remake of a Game Boy era game where you only had two buttons to use anyway, this doesn’t make the game hard to play at all.

Albeit its a bit awkward.

You can also use a Pokéball Plus accessory to play the game, which can also be used with Pokémon GO to help play that game. One pretty cool feature is the ability to take your Pokémon “for a stroll” when you do, allowing you to level up your Pokémon when you’re away from Lets Go.

The mechanic for throwing pokéballs in TV mode involves pulling back your hand (holding the Joy-Con or Pokéball) and then lowering your hand in a throwing motion. This mechanic is kind of hit or miss though (no pun intended). When the Pokémon is off to the side of the screen you need to motion towards one side or another. More often or not I would motion to the side but the pokéball would not listen to me. It was a bit frustrating.

Aiming and throwing of pokéballs were much simpler in handheld mode with the game making use of the Switch’s gyroscope to aim.

Another small thing that makes its long awaited return is the ability to have a Pokémon out of their ball and following you. If the Pokémon is large enough you can even ride on it or, in the case of a Pokémon like Charizard, fly on it. It’s a small touch but, like the Pokémon being visible in the overworked, it’s very cool.

Pokémon Lets Go is as fun to play as I had hoped. It’s more of a casual affair but bringing the Pokémon into high definition in a (more or less) mainline game has been a long time coming and is entirely satisfying.