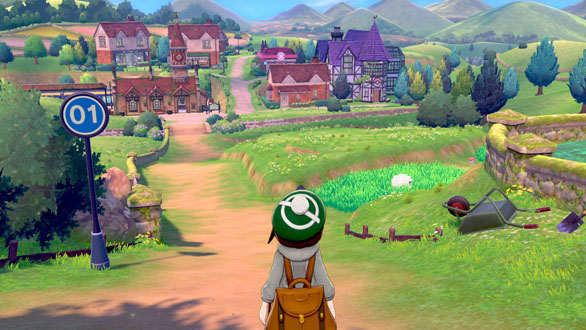 The eighth generation Pokémon title is here and it finally brings the main series to home consoles! The Nintendo Switch has a lot of great features, but being able to play your games handheld or share them with your family is one of the best. With Pokémon Sword and Shield I could finally sit down with my wife and experience the adventure together on our TV. There’s a lot of great reasons to love the new game, but this is the main one.

S&S refreshingly mix things up between typical Pokémon areas and a new section called Wild Areas. After you play through the intro to the game, your train gets stopped in a very different area. Not only are other trainers running around online, but you’re also free to turn the camera all around your character in 360 degrees. Tall grass spots abound to be able to catch a wide variety of Pokémon and even challenge increasingly more powerful creatures, or even get involved in multiplayer raids. Clearly, the Wild Area is a way to diversify gameplay and to give excellent post game content for players to enjoy. It’s even just something for when you’re bored with the story and you want to have some fun.

Inspired by the British Isles, Pokémon Sword and Shield take place in the Galar region. Here, a strange form of energy allows for both power generation for electricity and a big change to gym battles. In certain areas, trainers can Dynamax their Pokémon. Which essentially means they can make them grow huge for three rounds and use some amazing moves to take down their opponents. This concept is the main focus of the storyline, and even adds to the football (soccer to us in North America) style of the gym battles. Instead of just regular battles, you’ll usually get down to your last Pokémon and that’s when both you and your opponent will Dynamax your Pokémon for a last amazing rush to win. Another interesting note is that each game has two unique gym leaders. So two of the leaders you’ll fight in Sword are swapped out in Shield. In overall style, the world of Galar feels comparable to Pokémon X and Y. You’ll be able to explore some small towns, visit downtown sections of big cities, and do stuff like buy new clothes or change your hair. PokéCenters make a comeback and you still meet new and interesting people in each one. Catching new additions to your Pokémon collection is still the same too. Widdle down their power and toss a Pokéball at them in hopes of catching them. It’s the game that you’re used to with some fun additions.

One concern was that the Pokédex list was cut down. There are some missing characters you may love in this game. However, it’s hard to really notice when you’re just playing through the game. After all, you just meet Pokémon out in the wild. Be it regular routes like in past games, or the wild areas in the more 3d roaming mode. I didn’t find it to be a big problem. Let alone, it’s not unreasonable for certain Pokémon to just not be in the Galar region.

The storyline shines with the fact that everyone in general is friendly. It’s not obvious at first who the main villain is supposed to be. You are just a bunch of trainers, going through the gym trials to try and be the very best. This overall concept that you’re part of a group that is progressing through the game has a solid feel to it. You’re sort of on a field trip, rather than just out on your own. Pokémon titles have really stepped up their game in the way they feel. Sun and Moon specifically made you feel like a kid doing the challenges in that game. You were talked to like one. There are moments in Sword and Shield where the adults take over. That’s strong story telling. Without a second thought, you could be expected to do everything. Instead there are moments when the adults step up and look after you. The world of Galar is enjoyable and fun to progress through. At first glance, it doesn’t look like the map provides much in the way of exploration. However it’s not a straight line to the far North. Instead the game is broke into sections that see you doing a loop around the areas surrounding bigger towns. You visit various gyms in each area, and then move on to the next through a visit to the wild area again. So there is a lot going on in the Galar region.

Lets hit the feature list. You can set up camp and interact with your Pokémon in the wild areas. Nurseries make a comeback and you can breed Pokémon. Wondertrade, which is now called Surprise Trade, is included and just as fun. Gyms are back and more of a typical sense of what you’re used to. You do visit routes with specific Pokémon and trainers to battle for funds if you walk into their line of vision. Items like TM’s and many various stat boosing goodies make a return. You have a rival that you do battle with many times throughout the game. Sword and Shield captures the fun of Pokémon and brings it home, as an option. With the game being both portable and a home console title, there’s more options for how you enjoy the adventure. Dynamax is a fun addition that isn’t intrusive to the core gameplay since it only tends to be the climax of gym battles. Galar is fun, bright, and enjoyable. The wild area feels like a test to see what a more expansive Pokémon game could be, and is a great addition to the already enjoyable story. Overall, this is a solid addition to the Pokémon franchise with likeable characters and another enjoyable storyline.