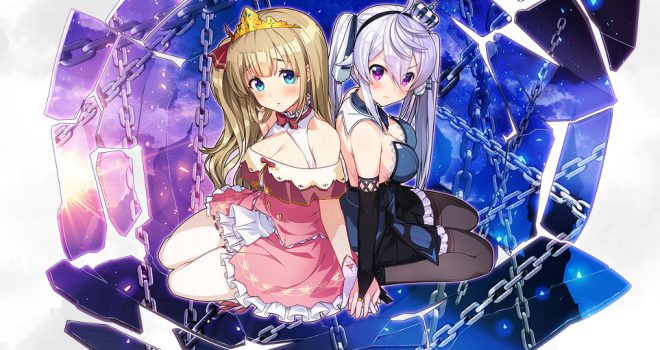 Prison Princess from Qureate is more than just a visual novel. While at first glance it has all the trappings of a relaxing story, the game has elements of point-and-click adventure to make the game more of an interactive title. As long as you’re okay with some lewdness in the game (and if you’re playing this sort of game let’s be honest, that’s why you’re here) then it’s a pretty solid adventure, if a little on the short side.

In the game you wake up in the castle of the demon king. You’re pretty sure that you’re a hero but there is one problem – you’re also a ghost. You can’t interact with anything. Luckily you’re not there alone as you soon find that there are two princesses chained up in the dungeon of this castle. While they can’t see you they can hear you. It’s up to you to help direct them to solve puzzles, uncover clues, and set themselves free from the mysterious castle.

The game got an ‘M’ rating from the ESRB with content warnings of ‘partial nudity and sexual themes.’ The warning is well deserved as the game is as about lewd and suggestive as it can be without actually crossing the line. You’ll use a cursor (or touch screen) to point out places in the room that you want the girls to inspect. When you do this they will oven reach up or bend down to inspect these points. The game isn’t shy about drawing the princesses in such a way that they show gratuitous amounts of cleavage or give you an eyeful with an up-skirt angle. Some of the dialogue also pulls from this genre sensibility and has the protagonist voicing his ‘lewd thoughts’.

Again, that’s the nature of the game so it’s not entirely unexpected. Just don’t play the game with another person in the room.

The art in Prison Princess is really well done and both of the princesses (Aria and Zena) are well crafted artistically. They are also polar opposites in terms of sensibilities with Aria being more innocent and bold while Zena is more tentative and untrusting. The voice acting in the game is also well done between the two princesses. I just wish that the protagonist character was also voiced – having this done in Raging Loop has become a standard as far as I’m concerned in visual novel games.

The bulk of the game is based on two aspects – exploring the castle and solving puzzles. The former filled out the bulk of the time in my play through with puzzles being rather easy to complete.

Most of the puzzles didn’t require a huge amount of thought and consideration. Built into the game are also hints which will give you an idea of what to do in a puzzle. A scrap piece of paper or some other clue can be found which gives you a heavy hint at a puzzle that you’ve yet to find. Some of the puzzles can actually be beaten with dumb luck. More than one puzzle only required a few quick button presses to solve, sometimes by accident.

The period of time in between puzzles however tended to drag on.

At times it felt like there wasn’t a clear direction of where to go and what to do, however there were other times where the only ‘hint’ that was given was that you needed to ‘look around for clues.’ Luckily there are really only a half dozen or so rooms in which to search. There are times when, after you’ve spent time clicking on everything in every room, you finally stumble upon what to do only to be left with the task of ‘seeing what happened.’ You then have to look around the castle again. It can be a bit monotonous when you just finished doing that and spots in the castle that you had clicked before (multiple times) will now result in finding an item that wasn’t there before.

It feels like a lot of trial and error. Having the environment have a subtle visual cue as to the new click-ability would have been helpful.

While the protagonist is a ghost and can’t do much of anything beside direct traffic, he does have a ‘thief sense’ that can be called upon. It only has a limited number of uses, but it will temporarily highlight spots on the screen that can be inspected. The cursor will also animate when you are hovering over an area of interest.

The only downside to the game (other than me getting stuck a few times) is that it’s very short. I spent way too long trying to figure out how to proceed in the game and my play-through was less than five hours.

Having said that though, Prison Princess is a lewd but cute game. It was nice to play a game in the visual novel that leaned towards the ‘choose your own adventure’ angle. Hopefully there will be more cute ‘point and click’ type games coming.