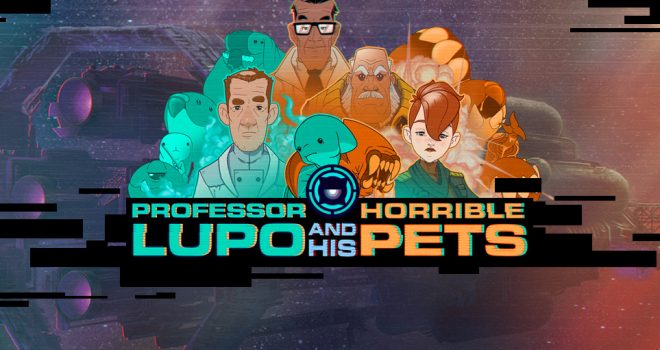 Professor Lupo and his Horrible Pets is a fun narrative driven puzzle-adventure game for the Nintendo Switch. It’s filled with head-scratching puzzles as you try to guide your Intern from the start to the goal as you try to save his life and reach the escape pod while staying clear of monsters which will eat you alive.

Professor Lupo is a space scientist who’s been traveling around the galaxy on the Aurora Space Station, gathering the most impressive collection of aliens: his Horrible Pets. Adorable and harmless at first sight, these aliens turn into nasty, lethal creatures once they sense a human being close by. The Professor is on his way back to the Earth to sell them to the highest bidder for weaponization. But something has gone terribly wrong, the Aurora Space Station is under attack by unknown forces, and now the aliens are roaming free!

Your job as the Professor’s Intern has always been to act as bait for these creepy critters. Now, you will have to add a new task to your to-do list: find a way to escape, or become the aliens’ dinner! On your way, you’ll unravel the secrets hidden deep inside the Aurora Space Station, and if you’re lucky, maybe even learn something about your own past as well.

The over-arching goal of the game from the start is to reach the escape pods and get off of the space station before it’s destroyed or falls to the Earth below. You’ll need to get from the start to the finish of each level, guided by the station’s AI computer. Your character, who goes by the moniker Intern, moves slowly thru the levels and unfortunately at a slower pace than the creatures on the station. The puzzle in each level stems from how to get to the finish and around the creatures.

Each of the creatures that you’ll come across in Professor Lupo and his Horrible Pets move around and behave differently. At the same time they each have different weaknesses that you can exploit depending on the particular level. Intern has a small pad at his disposal, which can be used to remotely open certain doors in the level. There are also other doors that must be opened via specific panels. Strategically opening doors can draw creatures towards you or in a particular direction that is beneficial to you. Some creatures eat others or are weak certain elements such as poison or fire, which can be found in certain levels.

One of the ways that the game makes it more of a challenge, beyond the fact that creatures are slightly faster than you, is that you sometimes have to be spot on with timing. From throwing switches, opening doors, and (slowly) making a break for it, your timing needs to be precise most of the time. There’s not a lot of margin for error, though thankfully the game is pretty forgiving and has continue points before some of the challenging puzzles.

There is a lot of trial and error. The game also has a few collectibles scattered in the levels. These collectibles aren’t required however their placement makes them exceedingly tough to reach and amps up the already strong challenge.

One thing that was nice is that the game isn’t just random levels strung together. The levels are connected by a narrative that continues and builds as the game goes on. The Intern talks with the station’s AI through the game and also meets other characters, with whom he must work together with at times. It’s a little bit of co-op where you have to rely on a computer controlled partner.

The game is also fully voiced and has pretty solid voice acting.

Professor Lupo and his Horrible Pets can be played in both handheld and docked modes. In docked mode you can use the gyro sensor from either a Joy-Con or the Pro Controller to put a pointer curser on the screen. With this you can click on the door switches just like you were using a PC. You can also stick to full button controls in docked mode. The point and click controls in docked mode are pretty intuitive and you use a combination of a shoulder button and a button click and drag the screen around. Virtually clicking on the screen feels very reminiscent of playing a game on the PC, though this controls scheme can be tough to use when things get crazy. Pointing and clicking with a mouse is far more precise than trying to point at the screen with the controller. It does give the game a bit of a nostalgic feel to the Wii days though.

Professor Lupo and his Horrible Pets isn’t the traditional puzzle game and the addition of story to keep you going from level to level gave them more weight. I’m a sucker for puzzle games and this was very fun.