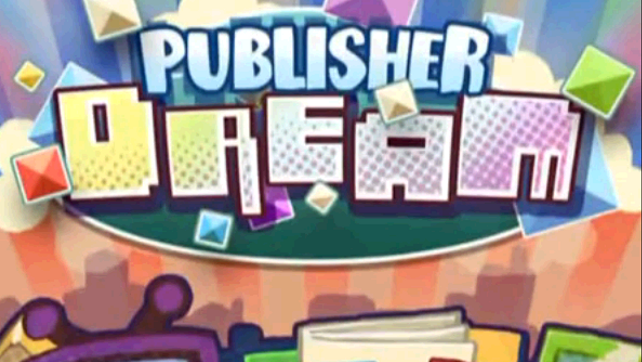 Publisher Dream is the follow up to Circle’s previous release Bookstore Dream. While in the previous outing you took control of a bookstore in an attempt to make it a financial success, this time you’re the manager of a fledgling video game publisher with your sights on success.

While the game is true to what the last game was it doesn’t have as much variety and strategy as Bookstore Dream and once you figure out what you’re doing there isn’t much to keep your interest. 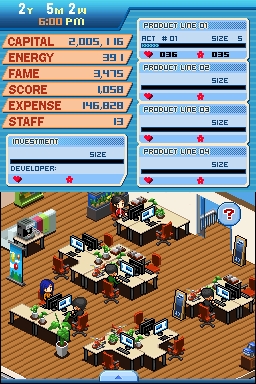 You are running new publisher Triangle who is developing games for the digital cShop store. Starting off the game with a modest amount of capital you have just nine years to reach your goal and earn enough profit.

The game begins with a small space and just a few developers. There are just a few genres of games to start off (puzzle, educational and card), each of which will take you two developers to create. Eventually you can create medium and large games, which take more developers and time to produce, but to start you can only work on small games.

Two developers are needed for small games, one designer and one programmer. Each staff member has three personality characteristics, which can be leveled up through the game. These are design, logic and management. Assigning staff who are high in design to the designer role, or who are high in logic to the programmer role will help the development of your projects. Other non-developer costs include the music score and promotion of the game. The more you spend to promote the better you game is likely to sell, but starting small in the beginning is always best.

One thing that should be watched is the stress level of your employees. If their stress reaches too high it will slow down the development of your game which means it will delay the release and ultimately the profit of each game.

Decorations are available for purchase from the shop which can help your staff. Items such as arcade are useful in increasing the creativity of your staff while relieving stress. Sofas and drinking stations can also reduce stress. Magazine shelves can increase the logic of your designers.

All of these items cost quite a bit of money to purchase so don’t go loading up your studio with decorations of you may be in for a cash crisis.

All of the items that you purchase require money to maintain, which comes out of your coffers every month. This maintenance can add up. Combined with the monthly salaries of your staff this requires you to keep in mind your expenses so that you don’t run out of money.

While your expenses are deducted monthly your revenues only come in quarterly. Luckily there is a handy menu to show you your quarter-to-date expenses and revenues to give you a heads up on how you are progressing.

Costs associated with game development are paid out right away in a lump sum. Once you get the basics of this down you can start holding on to some of your game developments until near the end of the quarter so that you don’t run the risk of running out of capital.

IF you do run out of money you can receive a small loan to keep afloat, but after three times you’re out of luck. 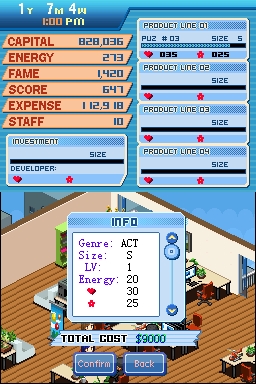 Other genres that can be developed later in the game include action, simulation, strategy, fighting, RPG, first person shooter and more. Each of the genres level up as you make more of them which will allow you to invest more money and more staff into making bigger and better games.

And with each title only being sold in the cShop for 24 weeks you’ll need to keep pumping out games to keep the revenue flowing.

At points in the game a third party developer will pop up asking for an investment. These companies will develop another game for you with out taking up staff. This gives you another game to draw revenue from without using up your staff.

Once I had enough funds I started giving the money to the company who asked the most money as I had lots to spare. I was especially willing to give funds to CIRCLE to develop games for me.

One of the things that I would have loved to have in the game would have been some customization of the titles. It’s hard to stay excited developing games when my newest title is an action game (called ACT #7) and an RPG (called RPG #3).

Eventually there isn’t much to do aside from choosing developers for another game and watching your staff run about the office until your capital increases.

Whereas Bookstore Dream required some strategic planning to make sure you had books in stock in time for special events like a book signing, there isn’t anything to do here aside from 1) choose developers 2) watch money roll in.

Publisher Dream is a solid simulation title and has a nice classic look and feel, but it lacks that little bit of character that makes a sim game special.