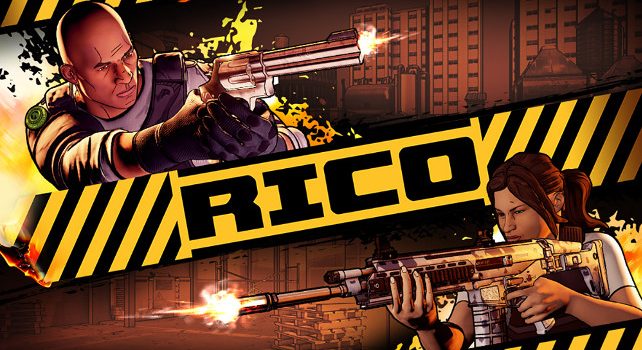 RICO is a first-person, buddy cop shooter inspired by modern action cinema. In the game you and a friend play as a pair of loose-cannon police partners, given twenty-four hours to crack a case as part of an elite RICO (organised crime) taskforce.

The core gameplay is simple – kick doors, shoot bad-guys, and make use of the element of surprise to gain an upper-hand against the odds.

RICO feels like a throwback to the first person shooter games of years past. A lot of games these days are story heavy with a lot of the gameplay buried deep within an epic story. In a way those games feel like you’re playing through a movie. Maybe there’s an overarching narrative that you’re moving through. Locals and goals change as that story progresses, and your weapons may change along with them.

Throw that all out the window. RICO sets all of that aside and focuses straight on the action. In a way it feels a lot like playing a game of GoldenEye on the N64 back in the day except that the levels are even more basic and generic.

That can be a good thing in a way, but at the same time that generic feel can leave the experience a bit stale. There are a few variations of levels (office, construction site) but it’s a bit bland overall.

The basic setup of the game is that you’re a police officer in RICO (Racketeer Influenced and Corrupt Organizations) squad. Basically you kick down doors and take out all of the bad guys in the area. Once you clear all of the hostiles you then have to get back to your entry point and you’re done.

That’s pretty much it. There are a few variations that involve unlocking security doors or defusing bombs, but kicking in doors and shooting criminals are the meat and potatoes of the game.

There’s somethings satisfying though about the act of kicking down a door though. The game also has a sweet option which allows you to slide through a door into the room like in an action movie. It’s also very satisfying. Once you do bust into the room the game enters into a slow motion mode allowing you to take aim and snipe the bad guys. If you’re in multiplayer mode this doesn’t happen though. That’s saved for doing a simultaneous entry by you and your partner. One thing that really felt missing in the game was music. While in a sense it’s fitting given the scope of what your character is doing, the lack of any background music during levels is a bit jarring. There’s no music at all. Total silence. There’s lots of music during the menus but once you start the mission there’s none at all. It almost makes you want to mute the game entirely and put on some music while you play the game. The ambient sounds in the game really aren’t that important anyway as the bad guys mostly make grunting noises. That and the flopping sounds that they make after you shoot them and the rag-doll physics cause their bodies to flop around.

Speaking the bad guys they’re pretty dumb. Maybe it’s not so good AI or an intentional thing. I’m not sure. It’s pretty easy for the most part to kick down a door, back away and then pick off the criminals one by one as they come running out. They don’t really duck for cover either and will come chasing after you. I had one humorous encounter where there was a bad guy with a pipe trying to come and get me but I was down a flight of stairs and he just ran back and forth along the balcony. After watching him for a little while never once approach the stairs, I took him out of his misery.

One thing that I always appreciate in these games is motion controls. Blame it on Splatoon but ever since I started with those controls I can’t seem to play without them. In RICO for the most part I use duel stick controls to move around, but the using the motion controls to fine tune aiming is a lifesaver. Especially when you’re in slow motion mode. One thing that RICO doesn’t have is the ability to quick reset the camera. Similarly there’s no quick turn either to turn around and head in the other direction.

One thing that RICO does have are virtually endless cases. The game gives you randomly generated levels to play through either solo or in multiplayer. You can also tweek the settings to make the levels bigger or smaller. Or type in a random number and see what you get.

The game also gives you a survival mode called Lockdown where you’ll face off against endless waves of baddies while locked in a parking garage or rooftop. It’s somewhat entertaining.