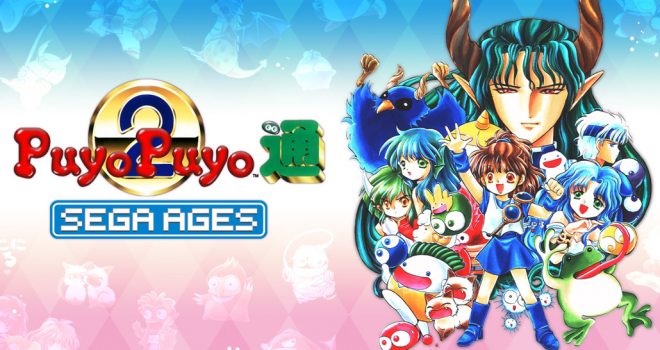 I never had a Sega Genesis or many of the later consoles in the Sega line. As such there are a lot of games that were exclusive to Sega that I never got a chance to play back in the day. Puyo Puyo is one of those series, although Puyo Puyo 2 was never localized for the West. The gold standard by which I always end up comparing “tile drop” puzzle games is Tetris, though this series seems to be what you would get if you combined Tetris and Dr. Mario.

While SEGA AGES Puyo Puyo 2 is pretty basic, once you get a hang of it, it turns into a pretty fun experience and a solid game.

For someone new to the game the first thing you’re going to want to do is go into the settings and lower the difficulty right down to the lowest. After playing the game for some time, I began to get frustrated at the steep difficulty ramp up in the game.

The main part of the game is the arcade mode where you go head to head (or side to side) with a computer controlled opponent. When you chain a few good clears together you will drop junk on your opponent. These are clear Puyo which get in the way of making chains. If you build up a really great combo you can really mess with their success and drop a ton of these little blobs. The only way to clear them is to clear a chain of coloured Puyo next to them.

After the first match was cleared without too much hastle, the second match was always invariably exceedingly difficult. The computer controlled opponent dropped all of the Puyo quickly and managed to build up multiple chains quickly, ultimately defeating me with ease. It was aggravating to be be wiped out so quickly and easily and it almost resulted in tossing the game aside. Luckily sliding the difficulty from ‘3’ to ‘1’ made the computer opponents much easier to deal with.

It’s no fun when you keep losing.

The game doesn’t really seem to have a single player mode. In Tetris there is an option to play on your own to see how long you can last. The speed at which the tiles slowly speeds up in Tetris. There isn’t something like this in Puyo Puyo 2 so you have to play against an opponent. With the hard difficulty this was something that I longed for, but once discovering the easier difficulty my longing for single player mode went away.

In addition to the arcade modes, there is also a two-player mode as well as an online battle mode (the online mode couldn’t be tested in pre-release).

The audio and look of the game are of course classic as this is a port of the original arcade classic. The game can be played with several different backgrounds around the gameplay area, most of which aren’t anything special. There is a special arcade background that can be chosen, though this puts the gameplay area into a smaller square on the screen. This wasn’t bad on the television, but was extremely small to play in handheld or tabletop mode. You can also play with smoothed effects or stretch the gameplay area to fill the full screen.

Perhaps my favourite selection was one that recreated the look of playing the game on an old arcade machine, complete with the corners of the screen curved like you were playing on an old monitor.

SEGA AGES Puyo Puyo 2 is pretty fun. If you’re fan of the classic look and feel of playing the game like it was back in the arcades then this is pretty fun. Once you lower the default difficulty to make it more accessible for beginners, it’s great fun.