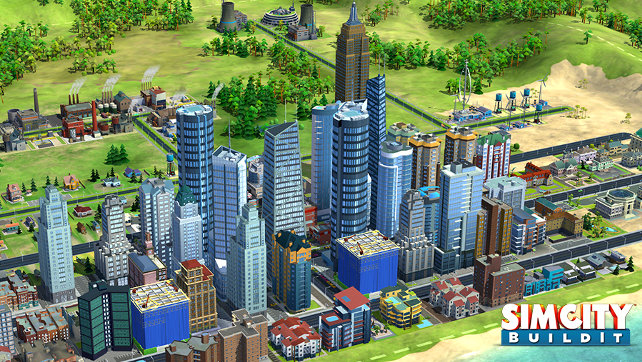 While EA Games never announced a release date for SimCity BuildIt, their mobile adaptation of the latest SimCity release for PC, the game has quietly popped up in on Google Play. In fact the official website, Twitter account and Facebook page still list the game as coming soon. But it’s out and it’s incredible.

It’s no secret that I love the SimCity franchise. Were it not for the fact that my computer couldn’t handle the newest game, I would already have that game as well. This newest mobile game is everything that I had hoped to see in the PC game, scaled down to fit in the palm of my hand.

The game looks amazing. The level of detail that is fit into the city of the game is incredible. From the cars driving around the city on the roads, the people walking on the sidewalks, the traffic lights at intersections, shadows being cast from the sun in the realistic day and night cycle, the game looks fantastic. Add to this that the textures are very well done, you can pinch zoom in and out fluidly, easily pull the camera from a 3/4 angle to overhead with another simple gesture, or spin the city around in 360 degrees with another, and the game has amazing realism. 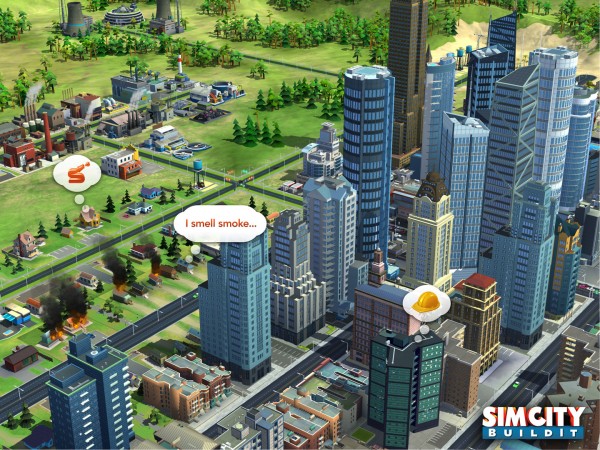 There is also top notch sound as well. The ambient noise from traffic, emergency sirens, crickets at night and more make you feel like it’s a real city. Close your eyes and just let the game idle and you’ll swear you’re sitting beside the open window in a downtown highrise. It’s that good.

So the game has the basics that you would come to expect from a SimCity title. It is your task, as the mayor of the city, to build up and manage your city. From setting out where residential zones, commercial properties and businesses. You will also have to manage utilities and necessities, such as power, water and waste. There are also the required police, fire and emergency services that go hand in hand with a big city.

The one thing that I didn’t really appreciate with the SimCity Social game on Facebook, which EA has since discontinued, was the reliance on the social aspect. In order to complete some tasks you needed specific items, some of which could only be attained with the help of your Facebook friends. While there is a social aspect to this game, and certainly more of that on the way, the developers have made the game so that you aren’t dependent on finding neighbours to do anything in the game.

On the contrary, you don’t have to play the game alongside any other people, or even online on your device, though doing so does have added benefits.

Once you place a residential zone, in order to complete the construction, you require supplies. You may need things like steel, wood, plastic, stone and other things as the game progresses. You can get some of these supplies from factories, which produce the items at differing speeds, depending on what the item is. Steel may take just a few minutes. Seeds may take more than half an hour.

And this is in real time.

Other supplies may have to be crafted, using the raw materials produced at factories. For instance, in order to make a hammer at the hardware store you first need to have both one unit of steel and one unit of wood. The store can then craft this item, which may be needed as a required item to complete construction of a residential unit or upgrading this unit.

Now here is where having friends can help out.

At a certain point you can unlock a trading depot, where you can put up some of your goods for sale. Not only can you do this, but using the Global marketplace you can purchase goods from other players from around the world. So if you really need that good right now to complete an upgrade, and don’t want to wait to produce the supplies and then manufacture the item yourself, this can be a quick way to do it. If you have local friends added to either your account or linked via Facebook, you can view their towns and also purchase directly from their trading depot.

Just one word of warning though. I linked my account to Facebook at one point and then later on saw that I was no longer linked. When I tried to connect to Facebook again I was warned that I might lose any unsaved progress. This in turn actually reverted my town to a previous point where I lost about a days progress. Not game ending I guess, but was certainly a bit frustrating to say the least. 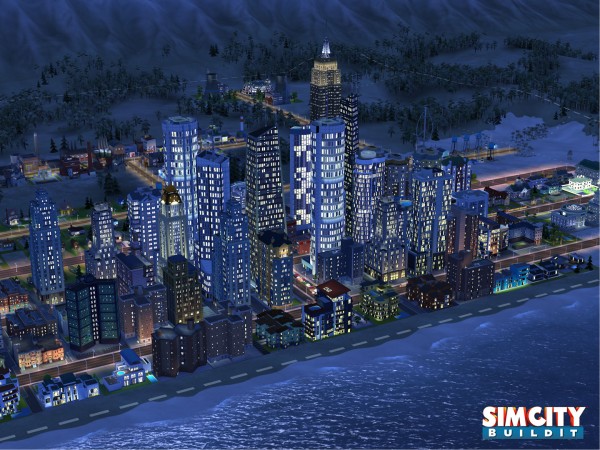 Expanding your residential areas is one of the only real ways to really earn money, aside from selling your items. You are rewarded with money (i.e. development charges in the real world) and a population boost when you upgrade your residences. You’ll need to raise your population to level up, progress in the game and expand your city.

One neat thing is that after a certain point you will unlock a trade ship option, which will allow you to export goods. Not only do you get a bit of cash by doing so, but you will also receive a gold key as a reward. The game says that these can be used to purchase some special items, but at this point I haven’t come across anything that I can spend mine on. This may be an in development option.

My only frustration with the game so far, aside from losing population with my city being reverted, is the way new utilities are introduced. Buying new stores and services is very expensive, and often I have to “save up” to buy that one more water tower or power station I need to handle the additional residential zones.

But when the game levels up and you are given a new utility, like the fire department, you are suddenly tasked with dropping enough fire stations to cover the entire town. And very often these stations (same goes for police, waste/recycling stations, hospitals) are very expensive and you need to purchase several to quench the sudden need. So while you are trying to scrounge enough Simoleons to do so, you end up with a bunch of abandoned properties as residents flee town due to lack of services.

This doesn’t really affect the game that much so far, but is at the very least a minor annoyance on my part.

So if you like the SimCity franchise you should definitely check out SimCity BuildIt. It’s free to play and you don’t HAVE to spend any real world money. The option is there for you if you aren’t patient, but thankfully EA isn’t making the gamer feel obligated to do so.