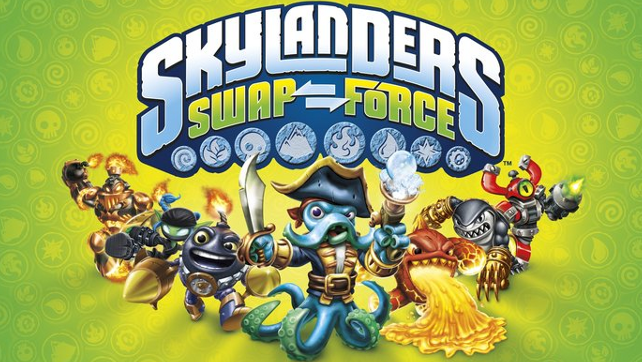 One of the biggest misconceptions of Skylanders is that it’s a game just for kids. The fact is that these titles have a ton of quality built into them and while some of the cutscenes may feel youth oriented at times, they tend to be enjoyable for all audiences. This is no small cast either, with the voice of Invader Zim (Richard Steven Horvitz) as your nemesis and Joe Swanson from Family Guy (Patrick Warburton) playing your friend Flynn, and that’s just to name a few! This is a professional, polished production.

Gameplay isn’t a kids button masher either. Skylanders in Swap Force gain experience, level up to level 20, and collect coins to purchase new moves. Best of all, the multitude of figures available are all quite unique in the different ways they attack. Some have moves that are more focused on motion while others are defensive skills. So if you haven’t checked the game out yet, and can resist spending beyond your means on getting only the figures you really need, the games come highly recommended.

So how do your figures get into the game exactly? The Starter Pack comes with what is called the portal of power. Basically it’s a drum you plug into your system via USB and set your Skylanders on top of to play them in game. This is fast and easy, even in two player mode. When either players Skylander is removed, the game zooms out to a pause screen and awaits a replacement. Place one on and they automatically load in, bringing you back into the action. 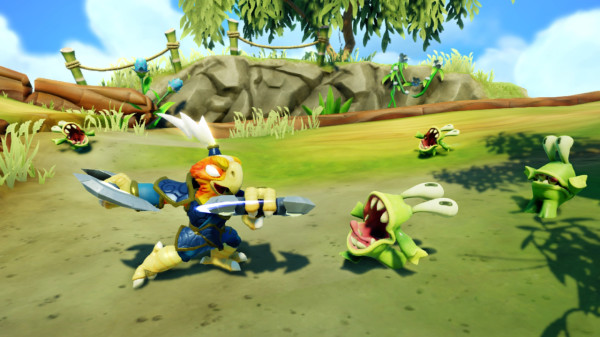 Skylanders Swap Force is the third title in the main series and focuses on adding new figures that you can swap the upper and lower halves of. How this works is that the upper half has a name, as does the lower half. So Wash Buckler and Blast Zone for example can swap to become Wash Zone and Blast Buckler! Leveling is stored with the upper part of the figure, while the lower half is one of eight new motion categories. These allow players to access new Swap Zone challenges which are mini-games based around various movement options, such as wall climbing, racing, or flying.

The new Swap Force figures work great and keep the action fast with two magnets inside of each half. So you take them apart, and all you really need to do is hold the top half over the bottom and they’ll snap right together quickly. Pop them on the portal of power and you’re all set to take control of one of these new combined figures.

While the creators could have just settled there and come up with some way for series lead villian Kaos to just be obsessed with the Swap Force and called it a day, they didn’t. The main storyline focuses on the magical volcano that created the Swap Force being the target for Kaos to use to “evilize” the world. How? By using “Petrified Darkness” crystals to turn one of four guardians of said volcano evil which will spread the evil for him via the volcano. For series fans, it seems Petrified Darkness is what was used to power Arkeyan Warriors. So yes, there is a lot going on here rather than just a basic story to plunk along your adventure. 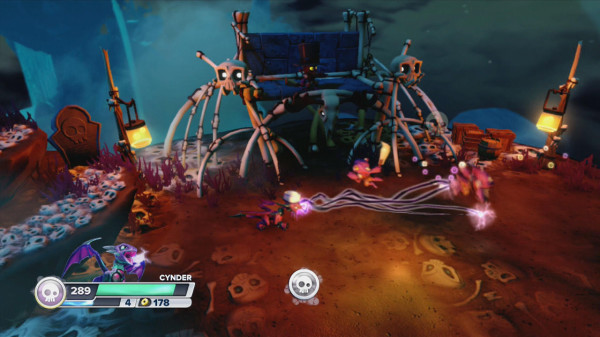 Like previous titles, there is a home base of sorts between chapters. This time that takes the form of Woodburrow, a small village near the volcano the story focuses around. As usual there is quite a lot to do and some areas to explore for fun and extra coins.

For the first time in Skylanders console titles, your characters can actually jump on their own instead of using jump plates. This allows for some easier flow to the game but there are also side scrolling sections too that really make this all a lot of fun! It’s neat playing your Skylanders in a different sort of setup like that.

One thing I do miss is heroic challenges. While there are bonus missions that you can go on with similar themes, they don’t actually boost your characters stats if you complete them. Instead this time you’re focused on collecting stars across bonus missions, regular missions and various other tasks such as collecting a ton of Skylanders to plunk into your game in order to raise your portal master rank. Of course though, it does make sense that heroic challenges have gone away sadly since as these games continue, there would just be far too many since each character seemed to unlock one in Spyro’s Adventure and Giants. 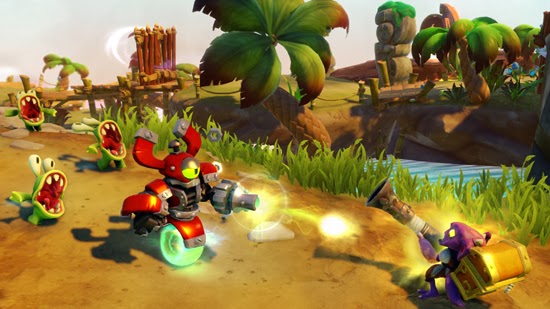 Of course the best part is that all of your old Skylanders work in the new game. So your favourite characters you bought way back for the first game are still compatible with the new one. Adventure pack level figures from the first game no longer give you those new levels in Swap Force. The items from those packs still seem to work however, though some have been altered.

The joy of Skylanders really comes in finding characters you like. Originally you’d think it would be a hard sell to get you to pick up a mix of figures. However it is quite fun finding ones you like and considering they’re quite nice quality, you don’t feel bad about it. Not only do you get a cool figure of your new character, you get to play them in the game too. That and with data being saved on the figures, it’s easy to take your favourites to a friends and game with them there regardless of the console version they own. 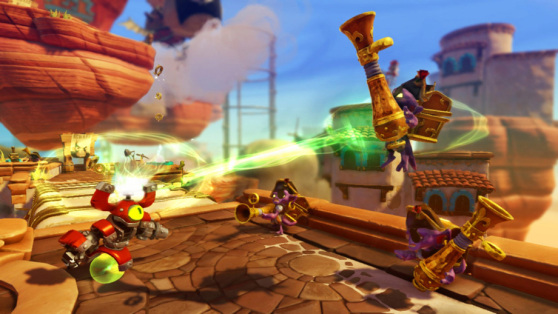 Now that you can jump, the levels do seem to be more vast. Gaps to leap across cover the lands and feel more like some of the expansive levels from the earlier adventures. Gameplay is varied as well, going from using items like binocular view finders to look for treasure, to riding down a river on a raft just to name two. This time around levels feel absolutely massive! You’re still going along a pretty direct route, not counting all the bonus paths you can take for hidden loot, but missions feel like they go on forever at times. The downside of this is you really do need to be ready to sit down and play for awhile when you want to game. Then again if you’re going to get your portal of power out and set up your figures for quick swapping, odds are you’ll be ready to game for awhile anyway.

Levels also feature locked doors which require Skylanders of a specific elemental type to open. These tended to lead to new stat boosting hats in the past, but now can feature legendary treasure or other various collectables too. Most of these help towards earning stars at the end of missions too. New to Swap Force are dual elemental doors. These can be opened by a single mixed element Swap Force Skylander in single player, or two different elemental characters in multiplayer. 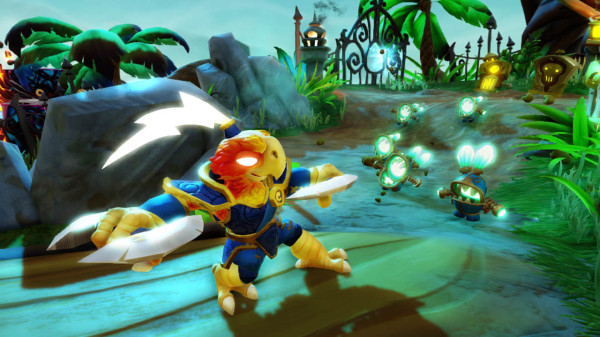 The levels are more beautiful than ever, though gameplay does seem to be zoomed out. Multiplayer mode does seem conscious of the added detail in that sometimes you can’t get too far apart. But then again you’re supposed to be a team. This does change in some areas though and you can get quite some distance between players. Figure models themselves also seem improved with characters like Thumpback looking incredibly like their figures. Him and Tree Rex really stand out as realistic representations of themselves, even if they do have the figures more plastic look instead of the materials they’re supposed to be made of.

Enjoyable characters, breakable objects, tons of stuff to find and secret paths to discover, time attack and score modes, arena battles, bonus missions, the list goes on. Swap Force is full of content and even long time fans will enjoy what is new. The thing that really surprised me when I got into Skylanders is just how long these games really are! Nevermind replaying missions with friends, different figures, and of course all of the side content. If you haven’t tried out Skylanders before, dive in here! You’ve got the full library of previous figures to choose from, and the storyline won’t leave you lost. 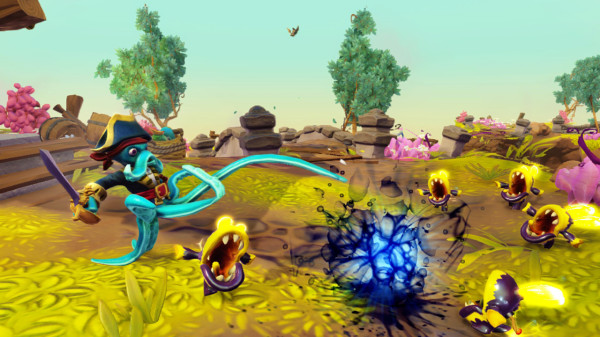 Please note, screens in this article may be from the newest consoles. Xbox One and PS4 do have versions of Swap Force available. However the graphics for all consoles are very impressive. Some Skylanders especially really shine. Thumpback to me looked really amazing on the Xbox 360 version as noted above.