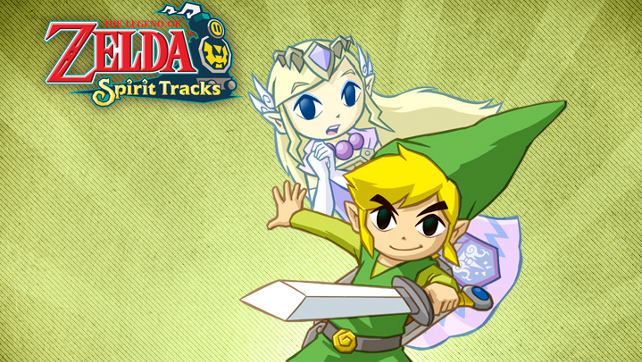 The game is several years old but I’ve just gotten into the game, so I figured why not do a review of the game. But since the game has been out for a while this won’t be as long or in depth of a review. This will just be some of my thoughts about the game.

Spirit Tracks stars Link, an engineering apprentice ready to become a qualified train engineer. He travels to Hyrule Castle to receive his engineer’s certificate from Princess Zelda. Zelda’s adviser, Chancellor Cole, believes the ceremony to be completely pointless, as the Spirit Tracks that make up the train systems around Hyrule are slowly disappearing and rendering trains useless. This proves to be the case as after the ceremony is finished, Zelda secretly leaves the castle with Link but is only captured by Cole, revealing himself to be a two-horned demon, and a mercenary named Byrne. Alfonzo and Link are unable to protect Zelda from Byrne’s power, and Cole uses dark magic to sever Zelda’s soul from her body. Cole and Byrne then take her body and depart, leaving Link unconscious.

As the game progresses, and I won’t give away any of the story here, Link uses the train to get to and from destinations. From towns, outposts and temples, the train is remarkably fun to operate. The controls are simple enough too. You can control the speed of the train with a switch on the right of the screen (two forward speeds, stop and reverse) as well as toot the whistle of the train. 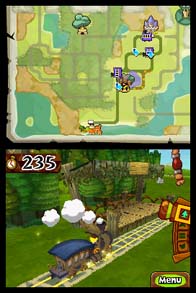 You can also shoot a cannon once you get one. This is useful when you start to be ambushed and attacked en route by various monsters. And, as with a real train, you don’t control where you go directly, but instead flip switches at junctions to guide the train where you need to go.

I’d forgotten how obsessed Nintendo was with the touchscreen with the Nintendo DS until I started to replay this game. The game is completely controlled via the touchscreen, with the d-pad or buttons doing nothing but opening the menu and pulling up your map from the top screen. That’s not really bad, though some sort of hybrid control would have been preferred. I love using the touchscreen. I also find it hard to keep my running pace up sometimes when my stylus strays too close to the edge of the screen.

Along with the touch screen control, which I really don’t mind, there is one other thing that Nintendo loves to do. Integrate hardware features into game mechanics. This is fine unless they became game breaking, as they did in this case. And it’s the reason why I’m only now getting around to playing The Legend of Zelda Spirit Tracks, which I have owned since 2009.

This is where the game gets broken.

I discovered from this game that the microphone on my original DSi system was broken. At some point between getting the system and playing around with the recording program built in and getting the game my microphone stopped working. So when I got to a part where I had to blow into the Spirit Flute I couldn’t. And just like that I was done playing the game, with a hardware issue preventing me from continuing. 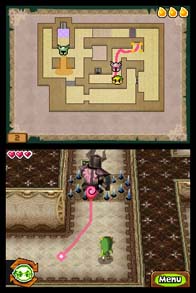 To say that I was crushed would be an understatement.

With that game breaking problem aside, the game itself once I got passed that is as great as any Zelda game I’ve played. The dungeons are challenging, the exploring is fun, and the wide array of side quests and challenges are fun to do. There is a lot to gather, collect and stuff to do aside from the main game to keep you well occupied.

A few times I got a bit stuck in the regular game and found myself travelling around the land shuttling passengers from place to place in a few side quests. Trying to balance fighting off monsters and raiders, while also trying to give them a smooth ride was a fun challenge.

If you have somehow missed this game, make sure your microphone works and definitely check it out.