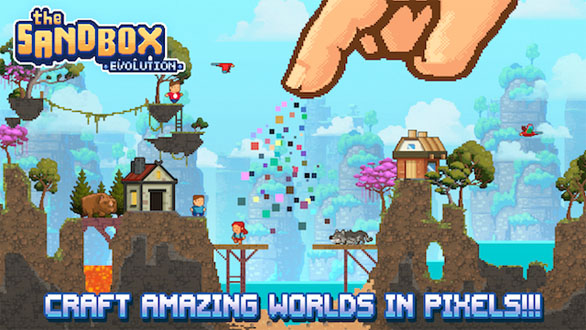 In a good way, The Sandbox Evolution feels like a PC port of a mobile game inspired by Scribblenauts. Then on top of that there’s also pixel art creation and interesting thermodynamic gameplay. Much of this is covered in short campaigns that teach you the games mechanics so you can dive in and make your own creations. There are two modes to the game. A creation mode that allows you to zoom around, dropping elements like their hot (or cold, or rocky), and a character mode that lets you run around as a mix of different heroes. From a Ninja who can wall jump to a Hamster that floats slowly to the ground when you jump in the air, it’s a good mix of play characters that give you someone to control through whatever devious levels you design. Elemental gameplay and character interaction aren’t blocked off from each other. So if you want to have a huge flood or a lava flow that your heroes need to evade, have at it! The cool thing about elements is the interaction they play on the world. Things can burn, lava can eat through ground, and ice can turn steam back into water. What does that matter? Think about it this way. You could make a switch to burn off some water in a cave. The steam from that water drifts over the cavern your character is in and is turned back to water by an icy ceiling. That water then rains down and fills up the cave, allowing you to jump to a high up ledge and escape. It’s clever elements that make the gameplay fun. Other devices include machines that you can power with electric charges and laser puzzles you can create with mirrors and blocks to bend the light toward your target goal. Elements can effect these things too. Like lightning charging up a mechanical device instead of a button or battery doing the same. All of these features come together to allow for a lot of creativity! After just releasing earlier this month there have already been a few updates that have addressed small glitches I’ve noticed. The nice thing about The Sandbox Evolution is that the levels are relatively short. So even if you do have the rare crash, it’s not a huge setback. Of course, that does mean you’ll want to save occasionally when creating a level. Sometimes it feels like you need to click and drag in a specific way to create some elements, but it’s never caused me to fail a level. Another level asked me to click and hold to select a color for pixel art creation and instead I needed to click the middle mouse button. These small hiccups are easy to overlook with all the goodies included. Even then, when the game does crash there is an easy to use window to report your problem as well if you wish.

Objects can be bought with in game currency that you earn by completing the included campaigns, and even better, user created content! I was happy to see the inclusion of this since it’s usually the norm to not reward players for engaging in fan made content. At least in the cases I can think of. That and especially since that currency can be used to unlock items in game, it’s a really nice touch. Really the best way to get an understanding of what The Sandbox Evolution offers is to check out their YouTube channel. There really is a lot of neat interaction in the software that can make for some cool interaction. Or if you just want to chill out and make some pixel art to share on the in game gallery, you can do that too. It is great to see that the games gallery is accessed within the software instead of via Steam Workshop. Not that Valves service is bad, but in this case it’s so much faster to be able to just click through levels in game that are downloaded basically instantly.

The Sandbox Evolution is a great package with tons of creative elements to play with. Between everything included and all the available user created content, it’s worth the asking price already. Considering there are probably even more goodies on the way from gamers like you, it’s worthwhile to check out!