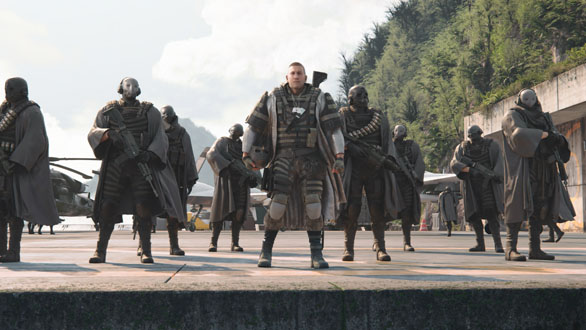 I’ve been having a lot of fun with Ghost Recon Breakpoint. More than I’d really expected. In the opening moments you crash on a hostile island, take out some enemy troops, and get to see the big bad in action. From there you end up at a hub area and get set to go out on missions. Thing is, this open world adventure just lets you go out and free roam like lots of Ubisoft titles these days. That’s where things really pick up.

Ghost Recon shines its most when you take on the role of a sniper. Crawling along the mountainside near a base you can scope out everyone from quite far away! Best of all, you can actually make those shots with competent accuracy and a bit of practice. There is nothing like clearing out a base like this. It’s fun and the punchy story line helps to keep you going. Sure, you’ll find yourself in flat out firefights too but that’s what your assault rifle and trusty pistol are for. You’re trapped behind enemy lines and quickly learn that a swarm of armed military drones aren’t letting you leave the island. Playing as a Ghost named Nomad, you’ll make a custom character and go out into the world. There’s tasks to take on, weapons and blueprints to discover, and tons of new areas to explore. It’s not just all shooting either. One early on mission has you using your own surveillance drone to search the hillsides for some sort of beacons. Each one, you look through a brightly lit viewing box to try and line up where the next beacon should be. It adds something to break up the usual warfare.

Yes, if you’ve read any other reviews, there are glitches. From what I’ve heard, a lot were pre-release errors that were fixed at launch. But of course there are still some but I’ve only found one that disrupted my gameplay. While flying a helicopter I managed to land it in such a way that my character got out into a rock. Stuck, I had to travel to a fast travel point and make my way back. Otherwise, I’ve been fortunate to not really have much going on in my playthrough in the way of glitches. Going back to the helicopter, there are vehicles you can drive as well. Trucks, motorcycles, and boats all dot the landscape and help you traverse the world. Really when you get down to just free roam, Ghost Recon can feel like a single player PUBG. Crawling through the forests, you can sneak up on troops and take them out without being noticed. Or you can just grab a helicopter and fly off to your next objective.

There were a few times I felt like I was playing out a movie. Making my way down a snowy mountainside, an enemy helicopter swept in and started shooting at me. I was able to hide and take it out before making my way to an elevated roadway at a tunnel. The guards there weren’t too happy to see me. After they were dispatched, another truck was heading down the road toward me. Now keep in mind, I play shooters, but not THAT many and not with much accuracy. Aiming down my sniper scope I managed to peg the driver as the truck was coming up to me. Taking off in that vehicle was just one of the moments that all play out in free roam. It’s fun, and that’s the best thing I can say about Ghost Recon Breakpoint. You level up your special-ops soldier to add skill points to a tree, collect gear and weapons to power up your item level like in Destiny, and overall always feel like you’re progressing. There’s collectibles to find, tons of stuff to take on, and some genuinely funny dialogue that gives the game character. Best of all as Rock, Paper, Shotgun pointed out, you basically feel like you’re raiding the science labs of some James Bond villain. It’s a fun adventure that I found myself investing more time in than I’d expected to. So it’s definitely worth giving a chance. Let alone, I’m sure Ubisoft is just going to keep working on it with patches.

Of course you can team up online for co-op, or even play a PVP mode called Ghost War. So it’s not just an open world you have to tackle alone. If anything it adds to it when you can have a group taking out a base instead of just on your own. Ghost Recon Breakpoint has an enjoyable story, fun gameplay that kept me coming back, and an interesting enough loot system that I dressed up my dude the way I wanted him to look. Which you can do cosmetically as well if you don’t want to be tied to low level gear you find. It’s a great game to be able to just pick up and play, even in short bursts. I enjoy the game, and one of my buddies who plays Wildlands, the previous Ghost Recon title, is loving it.