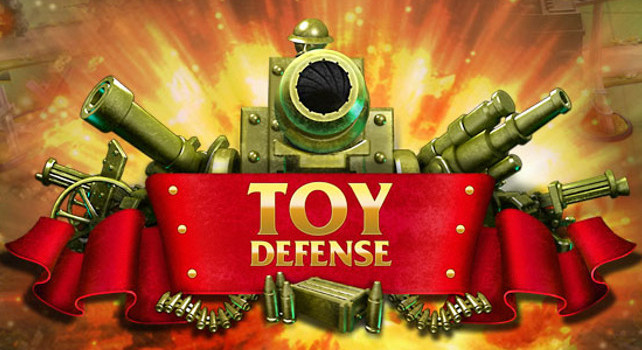 Toy Defense for the Nintendo 3DS eShop is a port of a free mobile game, and it feels like it. That’s not to say that the game isn’t fun, but the game feels very light on depth and purpose.

Toy Defense is a tower defense game. The goal of each level is to not let enemies get to your base. You are tasked with placing toy soldiers in predetermined slots on the battlefield, who will in turn fire at marching soldiers, vehicles, tanks, and planes that try to take down your base.

Aside from the planes, all of the other enemies will head to your base by following the winding roads through the level. Some are stronger than others, while some are quicker than others. But moreover they won’t pose too much of a threat to your own toy troops. With the exception of the occasional grenade tossed your way, the invaders will ignore you completely on their way to your base. A few of them will do a bit of attacking, but so long as you keep your eyes on the life bars of your troops you’ll be fine.

Each level will have a set number of waves, after which you will be victorious, gain “stars” and advance on to the next level. At the start of the level you will have a set amount of money to work with, which you will use to buy and place units. Soldiers cost $20, while the pricier options can run you $100 – $500. As you defeat enemies you will be rewarded with a bounty, usually anywhere from $1 to $2. You will need this money to both add more units to the available slots, upgrade your units so that they are quicker/stronger, as well as repair any damaged units.

Upgrading the units is the key to doing well in the levels. As you face tougher foes, or a larger number of soldier units at once, they will start to pass your defenses. Your units can only fire at one enemy at a time, so if they have a strong defense and there are a large number of them, some are bound to get through. However before you can upgrade your units to their full potential you will need to unlock these upgrades. This is where the “stars” come in.

Between levels, as well as in the pause menu, you can spend stars to unlock the upgrades to your units. The more upgrades you have unlocked, the more powerful units you have access to in the levels. The one limitation to this in the levels though is that you won’t be starting with souped up units at the start of each stage. The unit you initially purchase is the base unit. You can upgrade each unit as it is used. The more enemies it assaults the more experience it will gain, thus allowing you to buy the upgrades. There is an option in the game which allows you to use play coins to purchase “stars” as well. This presumably replaces the micro-transactions from the original mobile game whereby you would have originally spent real money on the stars. I’m not sure if it’s not possible for third party developers to use micro-transactions or if this was a conscious decision on the part of Circle, who brought the game to the 3DS. Nintendo Badge Arcade shows that Nintendo is on board with the concept, so I’m not sure if this is odd or refreshing that Circle didn’t include this in the game.

Letting one unit through to your base isn’t the end of the level though, thankfully. You have a life meter of 100 hearts, and you won’t lose the level until this hits zero. Unless you are really not having any luck it’ll be hard to let this happen, at least in the early levels.

It’s also neat that you can save some units for later. At the end of each level you can put some of your units into one of four slots. These can then be recalled in future levels. They revert back to their basic level and power of course, however they cost less to place on the battlefield. For example the powerful cannon costs a hefty $500 to place on the battlefield, however a saved unit will only cost you $350 to place. So this is definitely worthwhile, though you will have to purchase / unlock these slots with “stars.” Another handy feature that can be done with ease by using play coins.

Thank you Circle for not using micro-transactions.

There were a few things that I wasn’t too fond of in Toy Defense. Considering that the game was originally developed and released for smartphones it makes sense that the game is 100% controlled via the touch screen, but I don’t particularly like that. While tapping on the pause button while playing with the stylus on the touch screen is intuitive, having the option to press a button to do the same thing would have been nice. There are many times when I wanted to just tap on the [start] button to pause or use the circle pad to move around the screen and couldn’t. It’s not a big complaint, but I don’t really appreciate it when games have exclusively touch screen controls.

I also found it odd that the entire level doesn’t fit on the top screen. For the most part it does, but you’ll have to scroll a bit up and down to see the outer edges. This is done via the stylus of course too. The bottom screen features a zoomed in box of the top screen, so neither screen gives you a complete overview of the battle at once.

Another thing that was sadly lacking in the game was the audio. The title screen and chapter select screen has some catchy and appropriate music, but after that the game is pretty silent. The levels themselves are completely silent, save for the muted sounds of gunfire and the soldiers being killed (or destroyed since they’re toys). And this is so very quiet, that even with the 3DS at full volume it is virtually drowned out by pretty much any ambient sound in the room. When you put the level in fast forward the volume vastly increases, but not by much.

Toy Defense isn’t bad and it’s a fun diversion, but it feels like there is something missing in the game. Perhaps it’s because there’s no story or anything to tie the game together. Just being a series of similar levels, strung together with repetitive gameplay adds to the shallowness of the game. It’s not bad for $3.99 USD, and definitely the lack of micro-transactions is appreciated.