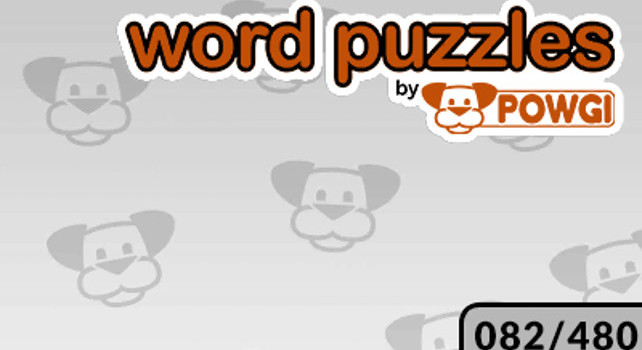 I enjoy puzzle games, though most of my puzzle solving comes from puzzles built into other game genres. From problem solving and deduction like the Ace Atorney games, or figuring out a logic puzzle in Resident Evil, puzzles are usually relegated to mini-games in other titles. With Word Puzzles by POWGI for the Wii U and 3DS, they take centre stage.

Word Puzzles by POWGI is a fun game to play.

Word Puzzles by POWGI contains six different pen-and-paper style word puzzles which are solved using the stylus and touch-screen controls. For the Wii U version of the game, the same information is displayed on both the television screen as well as the GamePad, meaning that the game fully supports off-TV play. This is very handy for the puzzler who wants to sit and figure out some brain teasers without taking over the family tube.

Since the game is broken into six separate puzzle games, I’ll go over them one at a time.

Word Maze – This game is like a wiggly word search. Instead of finding random words scattered about the page, in this mode you will have to find all of the words in one long connected string. And to make it more complicated, the words aren’t in straight lines, and can bend and run in any direction. This definitely ups the challenge. It’s like a word search and maze at the same time. Initially the mode doesn’t tell you what words you need to find, but does give you a theme for the words. This makes finding the words very hard, though the hint option shows you the words to search for. Spoiler alert: I used this often. Mixups – A fiendishly difficult anagram puzzle with three words all jumbled together! You’ll will have to build three complete predetermined words with a series of random letters. Imagine placing Scrabble tiles on the table and having to create specific words. It is very hard, though you can use the hint to give you the first letter of each word. This makes it a little easier, though still pretty tough. One Word – The word search puzzle where there’s only one word to find. Sound easy? Oh ho no no. While yes, there is technically just one word to find in the puzzle, the entire word search is built out of only the letters from that word. Imagine a 10×10 word search grid where you have to find just the word “puzzle” but this word search has only the letters p-u-z-z-l-e. And there is only one word to be found. This puzzle is simple, but amazingly hard. And to make it tougher you aren’t given the word you need to find. Nope. Instead you’ll will have to “fill in the blank” with a puzzle clue to discover the word you need, and then find it. Flowers – This one is pretty tricky, but the one that I found I spent the most time with. You’ll have twelve pairs of letters with a flower on the left side of the screen. The key is that each of the six words that you’ll need to create with these letters share the same two middle letters. Again, this sounds easy but is actually pretty touch. Oh POWGI, how you are a tricky one. Circles – Three overlapping circles hide three connected words. You’ll have to not only unscramble the letters in each circle to find the word, but all three words share one common letter. Which you won’t know. You’ll have to figure out the missing letter to unscramble them all. At first you just have the lengths of the three words, but you can use a hint to show you the first letter of each and then the theme of the words. Really the theme is usually enough to make the words pop out at you. Crossovers – Crossword puzzles with only one letter missing, which come together to solve a clue. The first part of this game is the easiest, as you choose from one of four letters to complete a pair of words. The final part of the puzzle is then to unscramble those letters to find the answer to the theme clue. That part is tough, and there is no hints here. Word Games are Lightwood’s speciality, and Word Puzzles by POWGI proves that. This game is tough, but it’s also long!

There are a total of 480 puzzles in the game, but that’s only half of it. Word Puzzles by POWGI features amiibo functionality! As well as solving the included puzzle content, you can also unlock special, custom puzzles by touching an amiibo. Each figure generates a unique personalised puzzle containing its nickname.

The Wii U version of the game is pretty fun, but it’s the 3DS which is really the home for this game. Word Puzzles by POWGI is the type of game that you can easily pull out and play while you’re out and about. It’s the perfect game to pick up when you have a few minutes to spare. And with the cross-buy feature of the game, you can pick up the game for both the Wii U and 3DS for one price. Simply purchase the game on one and then you can download the game for free on the other system, so long as you’re using the same NNID.