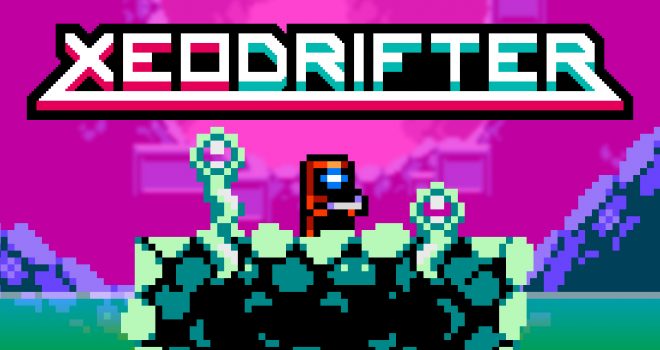 Xeodrifter is just the game I needed right now. Not only is it a simple and retro inspired metroidvania game, it’s also bite sized enough that it can be finished in just a few short hours. The game is not too hard but offers a perfect recipe of ease as well as being unforgiving.

Xeodrifter is the story of an interstellar drifter traveling the stars on a simple mission of exploration. We join our nomad as he embarks on the investigation of a small cluster of four planets in the omega sector, after a collision with a rogue asteroid damaged his warp core. Blast your way through alien landscapes, seek out valuable secrets, and defeat ancient guardians to unlock powers from a legendary supreme culture in this exciting journey of mystery and adventure.

The game centres around four different planets which you swap between. As with any good game in the genre you start off with a basic move set – jump and shoot. As you explore through each planet and defeat bosses you will unlock upgrades which give you new abilities. This then allows you to access other areas between the planets which ultimately lets you repair your ship and head home. The new abilities also lets you access some hidden or locked off areas which rewards you with more life points to work with and upgrades to your weapons.

The weapon upgrades are pretty cool too. Rather than the upgrades just upgrading your shooting, you can flexibly put those points towards changing how your weapon fires. You can make it more powerful, shoot quicker, change direction, or shoot in waves. Not only that but you can mix and match the points to create a unique firing ability which can be changed, adapted, and customized on the fly.

What gives Xeodrifter an edge with toughness is that through the levels you don’t get the ability to heal. Killing enemies as you explore won’t give you health drops so you have to manage to navigate the (sometimes creature infested) areas without taking damage. The only time that you do get any sort of healing relief is just before you enter a boss cavern, which also gives you a checkpoint, so you’ll at least get to challenge this baddie with full life.

The bosses aren’t too tough to beat once you figure out the relative pattern to avoid their attacks. Every boss creature is actually the same type of creature however, as you obtain new abilities, each new boss adds a new type of move or attack to its own move set. Just don’t forget to take into account the new moves you have when you’re facing a boss – like I did. I spent such a long time on one particular boss early on as I didn’t catch on that I needed to use one of my new moves on it.

Xeodrifter utilizes a neat mechanic that was born from it’s roots as a Nintendo 3DS game. Originally released in 2014 for Nintendo’s portable, the game made use of the 3D feature of the 3DS and allowed you to jump from the front into the background of the levels. It nearly doubled the footprint of each level and created some pretty clever puzzles as you occasionally had to switch between the two. The effect doesn’t look as cool as it did on the 3DS without the actual 3D element but as a gameplay mechanic it’s very well done.

I really enjoyed Xeodrifter. It looks and feels like an old school game and is really fun to play.