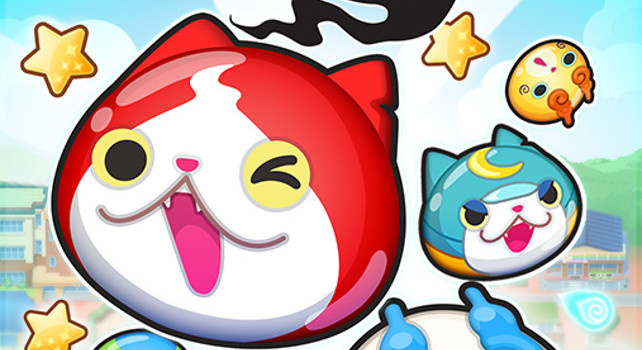 Taking a page out of the free-to-play games and capitalizing on the success of Yo-Kai Watch in the west, Level 5 has released a new free mobile game based off the venerable franchise on western gamers. Yo-Kai Watch Wibble Wobble shares all of the asethetic and charm of the 3DS game and packages it for mobile devices. The game takes the basic element of collecting Yo-kai and blends it with the traditional “connect-the-dots” puzzle gameplay, but turns that on its head and makes it feel like a fast and dash RPG battle.

In each battle, players must swipe to connect one Wib Wob to one of the same kind, forming an even larger Wib Wob. The Wib Wob are all in a jumble, constantly moving and reacting around one another. Like living and moving balls in a gumball machine, or like little blobs of jello constantly off each other. You connect small Wib Wob and tap on the large ones to deal damage to enemy Yo-kai, who usually attack in approximately five second intervals). The larger the player’s Wib Wob, the more damage it can deal against enemy Yo-kai. And you can keep connecting them together as much as you want, connecting smaller ones to bigger ones to make even larger ones. The more Wib Wob you connect, the faster the Fever Gauge will be filled, which kicks off Fever Mode. This makes you invincible for a brief period of time and also builds up your attack to send in a large blow. Quick fingers and a rapid fire tapping is a good strategy at this point.

Keeping in tune with the franchise on which this little mobile game is based, if you pop enough of a specific Wib Wob you’ll fill up its Soul Meter and ready a Soultimate Move, which ranges from damage to restoring HP. Just tap on the Yo-Kai and it will perform its Soultimate Move.

After each battle, you can occasionally befriend the enemy Yo-kai you’ve defeated. And just like the video game on which its based, you can increase your chances of befriending enemy Yo-kai by giving them their favourite food just before battle. If you befriend the same Yo-kai more than once, it will earn skill points and become more powerful.

Yo-Kai Watch Wibble Wobble includes many of the things that the 3DS game did, including the Yo-Kai medalium, buying food and feeding Yo-Kai, and using coins in the Crank-a-Kai to get items or Yo-Kai. You can even scan the QR codes found on the medalium coins from the toys for rewards, just like in the 3DS game. As with any mobile game your gameplay is limited to a certain number of plays, which recharge about every 15 minutes. The maximum is set to 6 plays, and when you dip under five you will see a timer start. Of course if you don’t want to wait you can spent Y-money to restore these moves. You can also spend the Y-money to keep you going in the event that you don’t complete a battle. You earn this Y-Money slowly by completing battles, or you can spend real world money to purchase more Y-Money.

This is a free mobile game after all.

Another unique feature to Yo-Kai Watch Wibble Wobble is that you can up to 3 different profiles onto one device. This means that families sharing a single device can still have separate save files, which is certainly handy.

Overall this game isn’t much different than any of the other bubble popping games out there, but there is definitely the draw of the charm of the Yo-Kai series. With the franchise heating up in North America it will certainly be a draw. It’s nothing revolutionary but is fun to play. If you’re liked the Yo-Kai Watch game on the Nintendo 3DS at all then it’s worth a FREE download for sure.