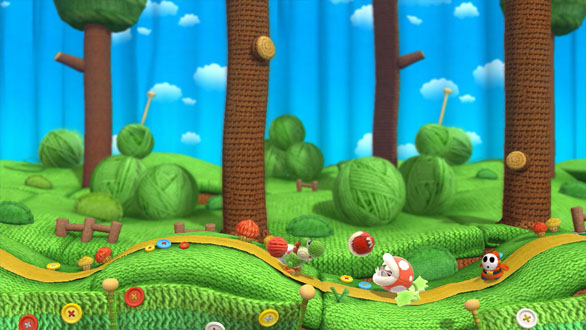 The charm and design of Woolly World only adds to the fact that it’s another adventure in the style of Yoshi’s Island. You’re not only given the option of playing as winged Yoshi which can make levels much easier, but unlike Kirby’s Epic Yarn you can actually fail. It’s not a big deal since you just pop back to your last check point, no lives required, but it’s a good bit of added challenge.

The game takes place in a world of happy yarn Yoshi’s who are invaded by a yarn version of Kamek the Magikoopa. He turns your friends into bundles of yarn and grabs them up! Yoshi tries to stop him but ultimately needs to set off on a quest to rescue his friends. Interestingly, each level includes five bundles of yarn to collect which unlock one of Yoshi’s friends each that Kamek has dropped. Not only that but these different designed Yoshi’s are actually playable. They don’t have any different abilities or such, but they do look neat! Your amiibo’s can also be used to unlock different designs based on some of the figures. Incompatible characters at least still give you an amiibo shirt for your Yoshi.

Level design expectedly is very well done with new mechanics being introduced in ways that get you used to them immediately. Like many Mario style games you’re just dropped into a situation where you need to interact with the new object to move on, learning about it in the process. The cotton clouds are a good example of that. There is no way to progress unless you figure out that you can jump in them much like Super Mario Bros. 2 USA’s quicksand.

Instead of eggs in this adventure, Yoshi throws yarn balls at enemies. Some of which just get bounced off the screen, but others actually get tied up in yarn before falling away or requiring another stomp to encourage them. In previous Yoshi’s Island games, you had a trail of eggs that followed behind you. This one is much the same with it’s yarn balls. You even come across baskets to hit like blocks in Mario games that pop out extra yarn balls. Of course Yoshi can also eat most enemies to turn them into yarn balls as well. You’ll also use yarn balls to stitch up the framework of platforms to make them solid to stand on. Question clouds with little wings also are scattered throughout the world, both visible and invisible until you run past them. Those also need to be bopped by a yarn ball to activate. Some drop hearts to restore the ring of health that circles Yoshi when you get hit. Others have gems that you can exchange for the ability to use various skill badges at the start of each level, such as being able to bring Yoshi’s dog companion Poochy along. Stages are a mix of yarn and hand crafted objects. Even enemies get in on the fun with crochet needles for weapons, crabs made out of change purses, and even egg wearing baby chicks. The best part of the level aesthetics is seeing Yoshi slightly sink down into the ground as he walks. It shows how soft the stages are supposed to be and gives Yoshi a neat illusion of weight. The graphics are so pretty that sometimes you’ll get lost in the yarn fuzz and couch cushion stages style with just how real it can look. The art direction on the game is absolutely fantastic!

Boss battles are a refreshing change. While not very difficult, they do have some good variety to them. Remembering the basics of gameplay throughout the levels will serve you well as you look for tied up yarn knots to unravel with Yoshi’s tongue. Usually a bandaged or taped on X marks the spot you’re meant to air pound down onto. Each hit tends to make the boss switch up their method of attack slightly too. They’re enjoyable. While not the insane challenges of Castlevania on DS kinds of boss battles, they are fun experiences that some games have been lacking in recent years. Collecting gems can also nab you a stamp badge that eventually unlock more stamps to use in Miiverse. Nintendo’s message service is well used in game as well, showing you miiverse posts as you enter each level and including some Mii’s on your world maps to go and talk to. Naturally they can be cute depending on the random messages you may come across. It also encourages you to dive down among the gems floating over dangerous pits to see if you can nab another stamp badge to add to your collection. It’s good to see Nintendo continuing to include this content in games like this. I don’t know how well it will work in the new Star Fox or Zelda (or if it will even be included) but that should be something interesting to keep an eye on.

The game includes six worlds with at least eight levels each. While that may not sound like TOO much the levels themselves are well thought out and the content is worthwhile. It’s also quite typical for Yoshi’s Island games as well. Thankfully there is also a ton of secrets to find along the way which will keep you busy and probably encourage the occasional replay of a stage to find all of the yarn bundles. Besides little yarn bows that Yoshi can lick to unravel, there are also walls you can walk behind and cushions you can push back. Replacing breakable dirt in this adventure is a spongy texture which can either be destroyed with big air drop, spitting watermelon seeds at them, or throwing your yarn balls through them to make a path. These can even lead to bonus areas. Rare doors also take you to mini-games where Yoshi morphs into various new forms. Plane Yoshi was my favorite which allows you to shoot these little ball projectiles in a side scrolling stage. Much like your yarn balls these projectiles go through all of the opponents in front of you who then drop gems. These special stages are timed and you can collect clocks along the way to extend your remaining time.

Yoshi’s Woolly World is a wonderful romp through a yarn designed game based on the Yoshi’s Island franchise. If you loved those, loved the feel of Kirby’s Epic Yarn, or just love platformers, it’s worth a go! It’s absolutely adorable and a fun new Nintendo side scroller. Plus it has a story! Not much of one, which is something I miss from the Mario Galaxy games, but it’s more than some recent titles. That’s the one thing I think Nintendo really needs to get back to, but I won’t preach on that here. Woolly World is cute and cuddly and the basic storyline works well with it’s design.